I’ve always heard that it’s dangerous to mix fountain pen inks. Some people have had the experience of mixing inks, only to have solids, or a precipitate form, which can potentially clog a fountain pen. I am usually very careful about completely cleaning out my pen before using a new ink. The main reason for this is that I don’t want the old ink color interfering with the new ink color. To be honest, I was never worried about mixing inks.

Years ago I mixed lots of vintage with no problems. I was on a quest to recreate Skrip Persian Rose and figured that the closest I’d be able to get would be by mixing different colors of Skrip from the same time period. I had two, three and even four-color mixtures going without any issues. While this was my only experience with mixing inks, it went well so I figured there was nothing to worry about with other inks.

Still, so many people talked about the negative side effects of mixing ink, I decided to do a little experiment of my own. Could I get some inks to form a precipitate? Would things mix together without issue? I had to know, so I grabbed my bag of sample vials and started mixing various inks together, two at a time. This started out completely randomly and I didn’t see any kind of precipitate. Two saturated inks? Nothing. Two unsaturated inks? Nothing. Hmmm, how about some iron gall inks? Bam! I got precipitate. 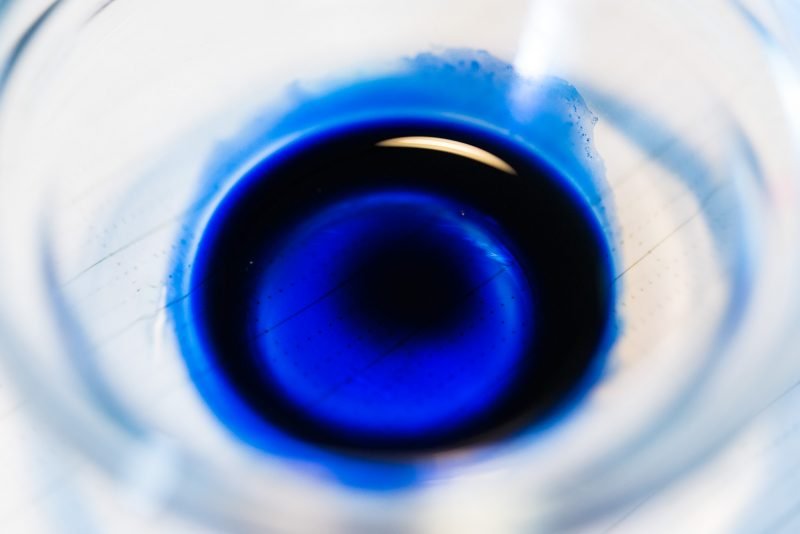 This mix of KWZ Iron Gall Bule 6 and Monteverde Sapphire had no precipitates. 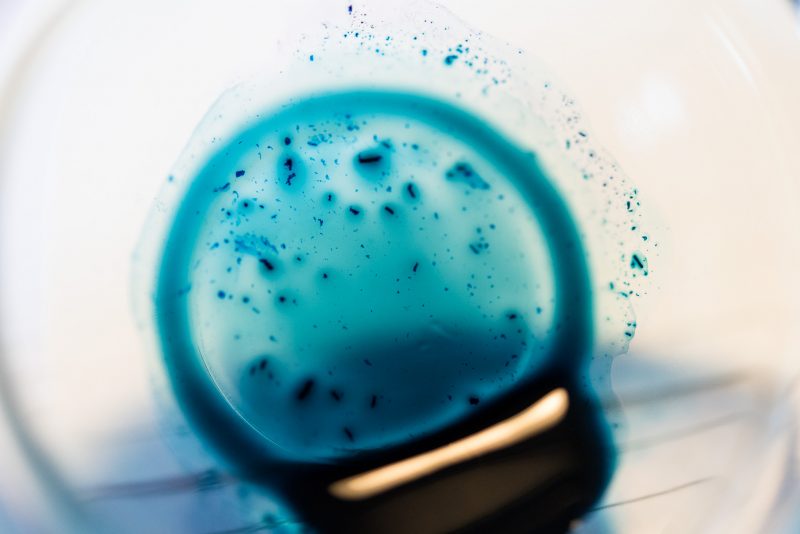 This mix has some fairly significant solids. I would not want this in my fountain pen! 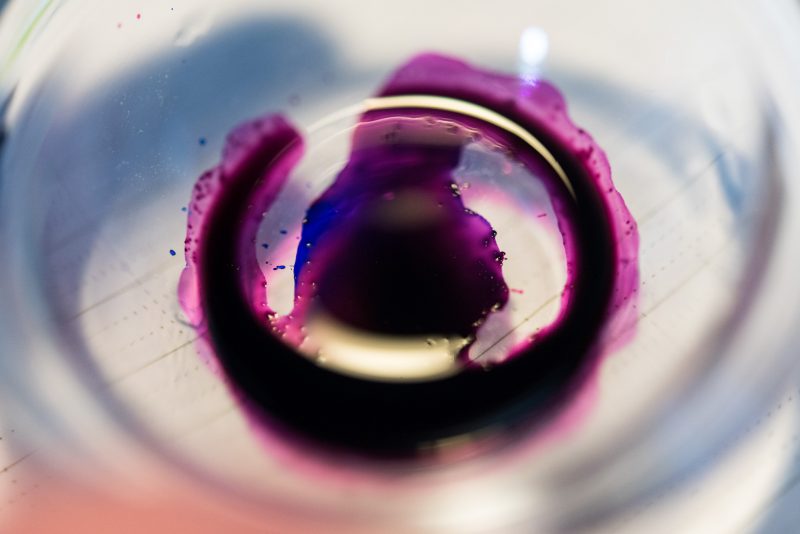 I wondered what was causing this, so I did a bit of research on ink pH. Other than saturation and manufacturer, this was the only measurable data point I could think of to take into consideration. It turns out Sailor inks are on the basic side of neutral, with an average pH of around 9. Not wanting to pick on Sailor, I found some other inks that I had that were also basic and it turns out that most Pilot Iroshizuku inks have a similar pH to Sailor inks. I grabbed some Fuyu-gaki and Ama-iro and mixed them. Sure enough, precipitate. I also tried some Iroshizuku Ama-iro with Sailor Grenade and got precipitate. 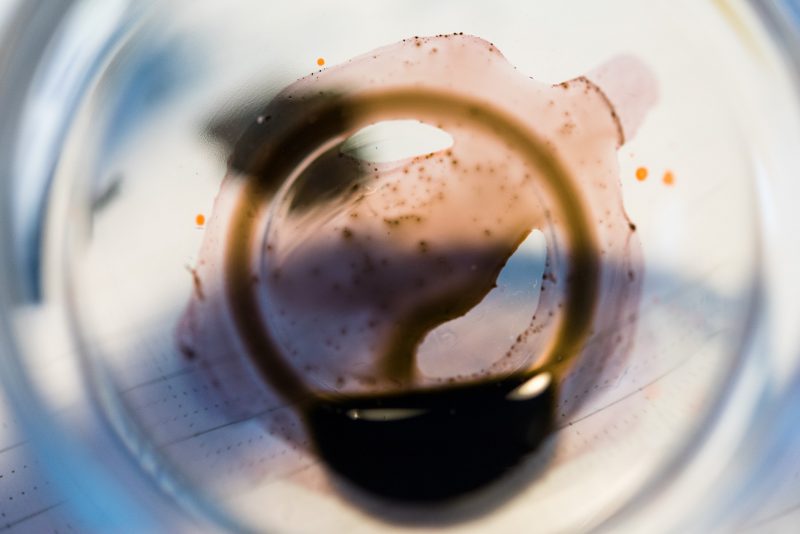 Finally, I wanted to try a more acidic ink with a more basic ink. It turns out most Montblanc inks are acidic, so I mixed some Corn Poppy Red (pH 5) with Grenade. While it wasn’t as obvious, I’m still going to say that I got precipitate. 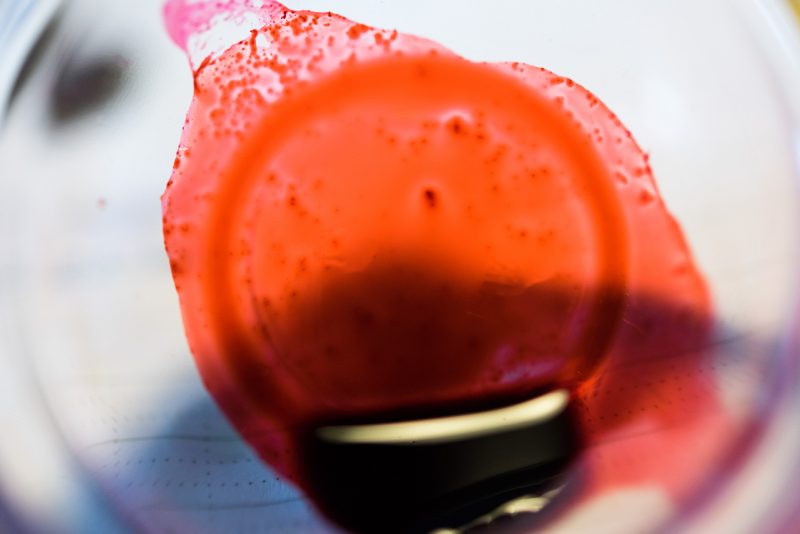 This mix of Sailor Grenade and Montblanc Corn Poppy Red has a few solids.

After seeing so many combinations that formed precipitate in a row, I wanted to make sure that somehow the container that I was mixing inks in hadn’t been contaminated. I went back to one of my early mixes that did not form a precipitate, Sailor Grenade and Blackstone Lemur Lime, and mixed it up. Once again, no precipitate. Now I could be sure that particular combinations did indeed mix well while others mixed with bad results. 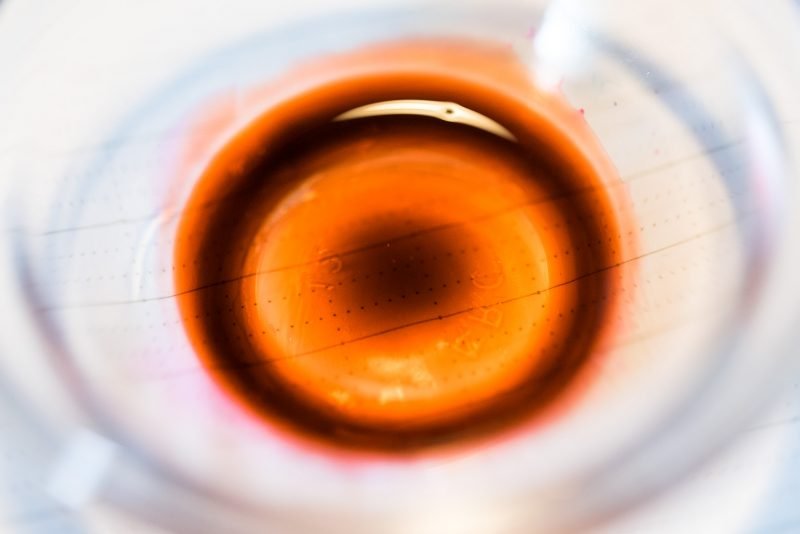 This is a mix of Sailor Grenade and Blackstone Lemur Lime that did not produce precipitates.

At this point I decided to stop. I’m sure I could have spent all day mixing inks from different manufacturers, but after seeing how easy it is to get a precipitate, I realized that mixing inks is something that I’m going to avoid. I didn’t need any more proof that it’s a bad idea.

I figured that I’d have to spend a lot of time and mix a lot of inks to see any type of solids, but it turns out it happened fairly quickly and much more often than I would have predicted. Even more surprisingly, inks from the same manufacturer didn’t mix well. I thought for sure that mixing two Sailor inks or two Pilot inks would be safe, but it turns out it’s not a good idea.

One good question to ask is whether any of these mixtures would actually clog a fountain pen? I certainly don’t plan on trying any of them in my pens. I did find a few nice color combinations, but none that are worth ruining a pen over. Still, the actual solids that formed were small. At the most extreme, I was expecting something like cottage cheese, but the reality is far from that. Still, it doesn’t take much to clog a fountain pen and I’m sure that some of these mixtures would do the job.

The bottom line and main takeaway from this is don’t mix fountain pen inks. It may be fun to create new and unique colors, but the risk isn’t worth the reward. Furthermore, at a minimum you should always flush your pen with clean water before filling it with a new ink color. I would definitely recommend fully cleaning your pen, but if you can’t, a flush should be enough to prevent any pen-clogging solids from forming.