Lamy pens, specifically the Safari and AL-Star, tend to get mixed reviews from people. It’s not because of the pens themselves and how they write, but because of the pen design and the uniquely-shaped grip. Before I owned one, I was squarely in the “don’t like them” camp, but then I received one as a gift and quickly realized what great pens they actually are. I now own a few AL-Stars and a Lamy Vista (essentially a clear Safari). What was it about these pens that made me go from “no thanks” to “yes please”? I’ll tell you.

Similar to the Kaweco AL Sport that I previously wrote about, the AL in AL-Star stands for aluminum. That’s right, apparently I have a type, and that is aluminum fountain pens. Unlike the AL Sport, which is completely made of aluminum, the AL-Sport has a plastic grip section. I feel like it would be a really outstanding pen if it was entirely aluminum, but as it is I still prefer it to the all-plastic Safari or Vista.

Unlike the AL Sport, this is a full-sized pen. In fact, because it is somewhat ubiquitous, many people use it as the standard pen when comparing pen sizes. I find that it’s a great size for me and I’m able to write with it unposted (no cap on the end of the barrel), which is my preferred way of writing with a fountain pen. This is by no means a large pen, though. In fact, compared to many modern pens, it is fairly small. Still, what matters the most to me is how the pen feels to hold and use and this pen just works for me.

Since it is made of aluminum, this is a fairly light pen. If you are sensitive to writing fatigue due to the weight of your pen, this would be a great pen to consider. I feel like I can write with it for quite a while with no issues. The triangular-shaped grip is one thing that many people don’t like about these pens. Personally, it doesn’t bother me at all, but I’m sure if you hold your pen in a nontraditional way it could be an issue. 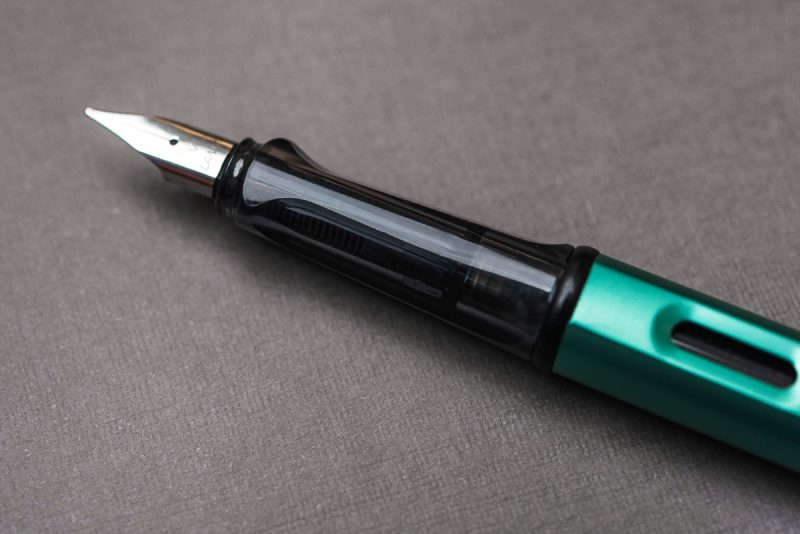 Here you can see the shape of the grip is not round.

The overall design of the pen is another one of those things that some people don’t like. I used to be in that camp before I owned one, but now that I have a few I have found that I don’t really mind the looks at all. In fact, I like the sleek, simple cap and body, particularly the flat sides of the body, and only really have a gripe with the clip. Looking back, the clip is the main thing that I disliked about these pens before owning one and it is still the part of the pen that I like the least. It does work very well, but I think it just looks childish. It also adds a lot of girth to the pen, so fitting it into a tight pen sleeve can be difficult. 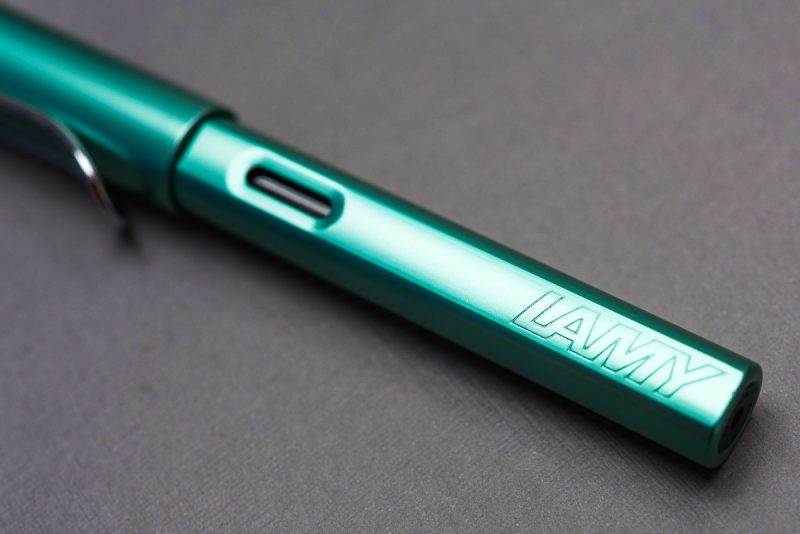 The body has flat sides, which I think looks great. 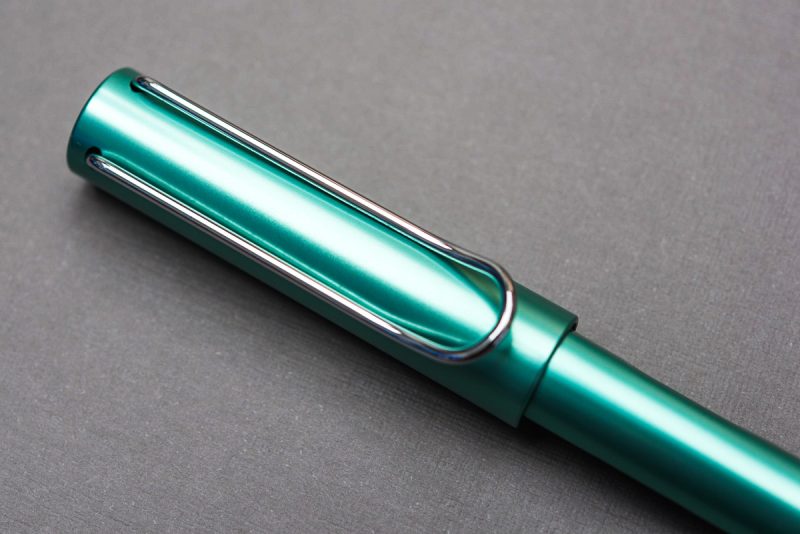 The clip shape is my least favorite part of this pen.

One thing that I have really grown to love about the AL-Star and Safari lineup of pens is how easy it is to swap nibs. It is literally a 5-second process, as they simply slide off and onto the feed. They are also fairly easy to find and quite inexpensive, although inexpensive is a relative term, as they can coast anywhere from half the price to the full price of a new Safari (approximately $10-20 USD). Having a few different nib sizes is a great way to quickly and easily get a different writing experience from the same pen.

The nibs are very easy to remove and replace.

Speaking of nibs, how do these write? I find that they tend to write very well. They’re no luxury pens, mind you, but for an inexpensive, mass-produced pen with a steel nib, they get the job done. I find them to be on the wetter side of writing and have enjoyed using their medium, broad and even an oblique double-broad! That one really lays down a nice, wet line. Since the nibs are so easy to remove, they are also quite easy to tune, although I feel like extra care needs to be taken with them to prevent bending if you are working on the nibs while not installed on the pen.

These pens are filled by either a cartridge or converter. They do take a proprietary cartridge, so you’re limited to Lamy inks (unless you want to refill the empty cartridges with an ink of your choice). You can also use a converter, which is an inexpensive option and my preferred method of filling these pens. Both the cartridge and converter hold a decent amount of ink and should last most people a good amount of time. The body comes with a cutout in the side so you can see what your current ink level is. 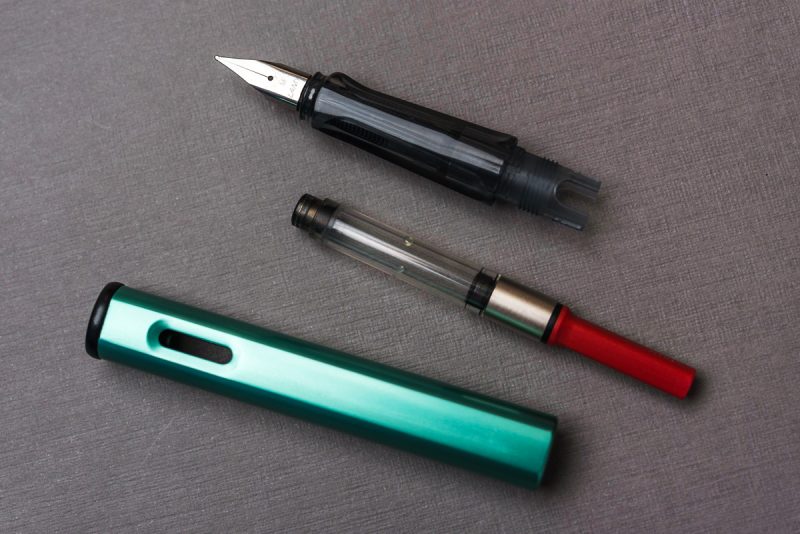 I would highly recommend getting a converter with your pen. 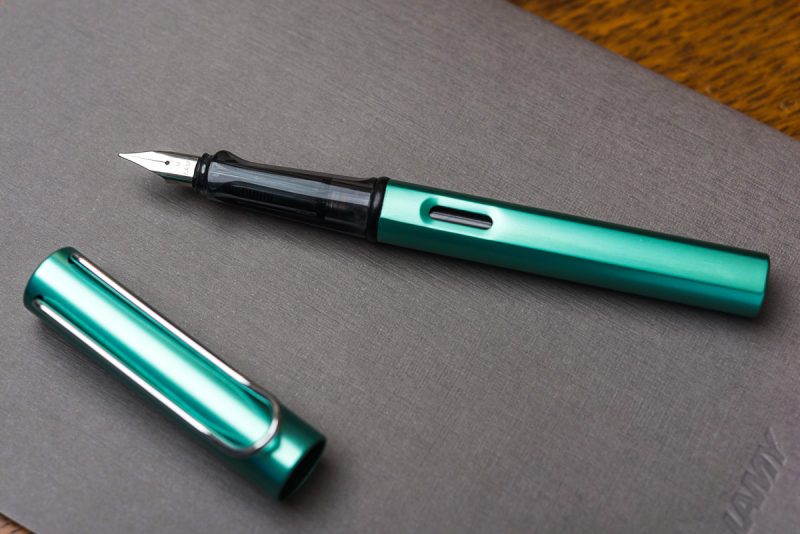 The ink window in the body allows you to see your current ink level.

I’m not a huge fan of multi-colored pens, but I do like that the AL-Stars come in so many different colors. I feel like the solid, metallic options are much more my style than some of the more swirly, glittery options available today. Of course, those are typically hand-made pens, each one unique, while an AL-Star is a mass-produced pen that is in no way unique. Still, they work for me and add a little color to my otherwise mostly-black pen collection.

While I’ve mostly talked about the AL-Star, I do want to briefly mention the other similar models that Lamy makes. The Safari is exactly the same as the AL-Star, only it is entirely made out of plastic. The Vista is just a Safari that is entirely clear. There is also a line of metal pens that is more expensive than the AL-Star called the Lamy Lx. They are still aluminum, but are anodized with “precious metals” instead. They also come with a black steel nib instead of the standard steel nib and a solid, matching storage tube. The Lx pens run around 2-3 times the price of an AL-Star. I bought one at a great price once and must say that, unless you really love the color, are not worth the extra cost. There is zero benefit to spending the extra money unless you really want a storage tube instead of a cardboard box. 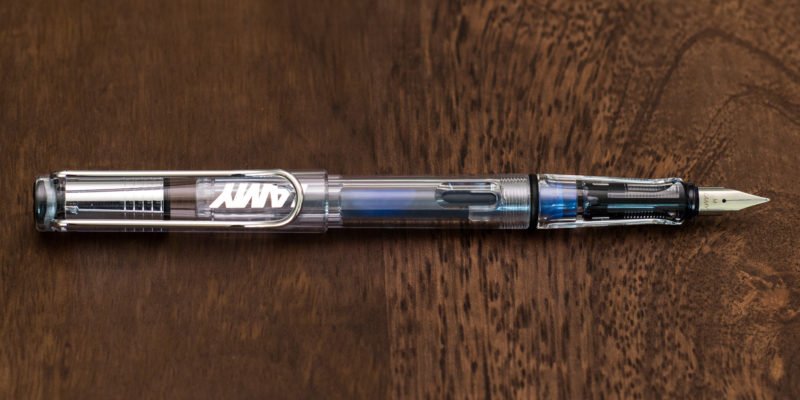 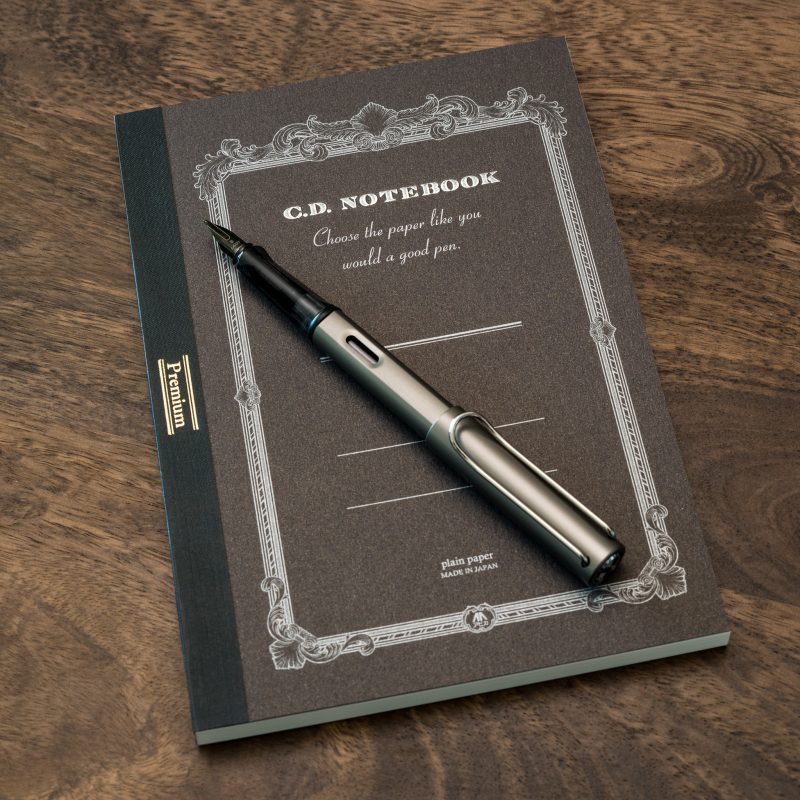 This is a Lamy Lx

Lamy AL-Stars (and Safaris for that matter) are fountain pens that many people have quite a number of. They come in so many different colors and are fairly inexpensive, it’s hard not to have more than one. That is, assuming you like them. They tend to draw a mixed reaction from people, ranging from a dislike of the overall style or the shaped grip section to a love of the variety of colors and low price. As I said, after receiving one as a gift and giving it a try, I moved from a dislike of the pens to owning more than one. I love how easy it is to swap out nibs and find that they write really well for such an inexpensive pen. I also really enjoy the feel of the pen. For some reason aluminum pens just do it for me. If you’re one of those people who has never given a Lamy AL-Star a chance, I would highly encourage you to try one out. If you don’t love it, you’re not out a lot of money and I’m sure you can pass it along to someone else who will enjoy it. Who knows, maybe you can use it to get someone else started with fountain pens?