Many people enjoy using fountain pens not only because they are a pleasure to write with, but also because they are beautiful. Depending on the type of writing you do, sharing your writing with others may not always be possible. Fortunately, in today’s world of social media it couldn’t be easier to share images of your beloved pens. In this series of articles, I want to share some tips on how to photograph a fountain pen so that you can get the best images possible, regardless of what type of camera you use.

In this article, I’m going to focus on light. Before you start taking photos, you’ll need to make a few decisions, most of which deal with the aesthetics of the images you’re about to create. Do you want a bright image without shadows or do you prefer something a little more dramatic? Do you want to use light that’s already available or set up some sort of external light source? All of these things are important to consider before you ever take a single photo.

A note about the following images. I used a plain white piece of paper for the background so it would be easier to see the effect different light had on the final image. While they might not be the most exciting photos, they should hopefully be helpful. Also, I used a continuous light source that I use in photography, but the same concepts apply regardless of if you’re using a desk lamp or sunlight.

One more thing… clicking on the images will give you a version that is better quality. This should make it easier to see the difference between similar images.

Don’t miss the next two articles in this series: Color and Camera Gear

How To Photograph A Fountain Pen: Setting Up For Success

The main thing that can make or break any photograph is the light. Without good light, you’ll never get a good image. With this in mind, you’ll want to take the time to set up your work area before you start to photograph your fountain pens. Before doing anything else, let’s talk about the qualities of light.

In general, there are two types of light… hard and soft. Hard light has hard, defined edges between the light and shadow areas of an image. Soft light has a very soft, gradual transition from light to shadow. Imagine how things look when you’re outside on a sunny day versus a cloudy day. A sunny day produces hard light while a cloudy day produces soft light.

If you want hard light in your images, you’ll want a direct light source such as a lamp, flash or sun streaming through a window. If you want soft light, you’ll want an indirect light source such as a window that faces away from the sun or that is covered in a diffusing fabric. You can also get soft light by directing a lamp at a wall and using the reflected light instead of light coming directly from the lamp. 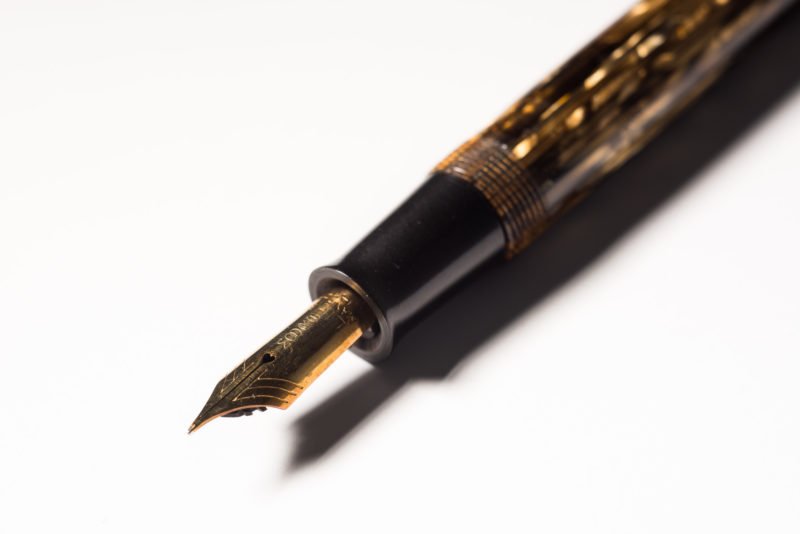 This direct light creates some very dark and severe shadows. 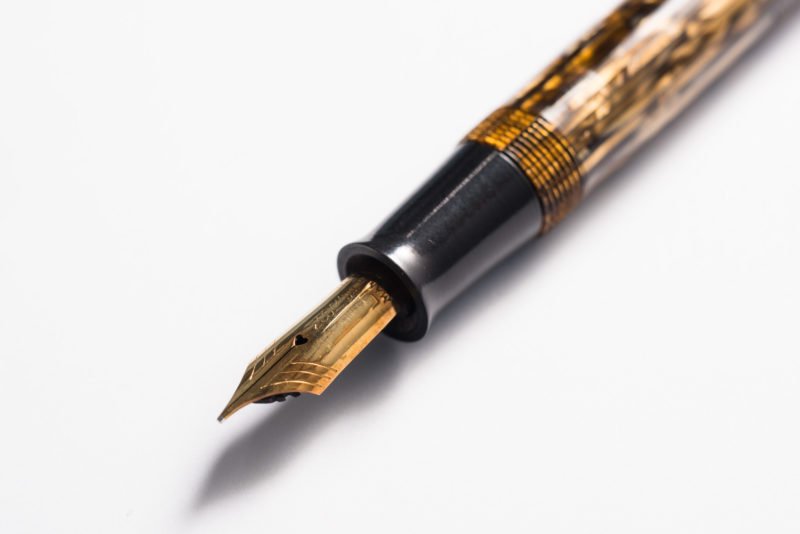 This indirect light does not cast hard shadows and provides even light throughout the image. 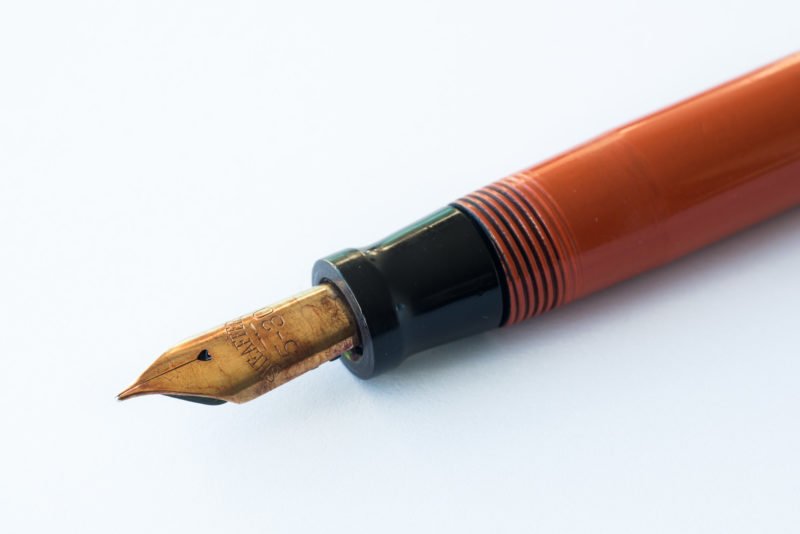 The light for this image was window light. The sun was not coming directly through the window. Notice the soft shadows. 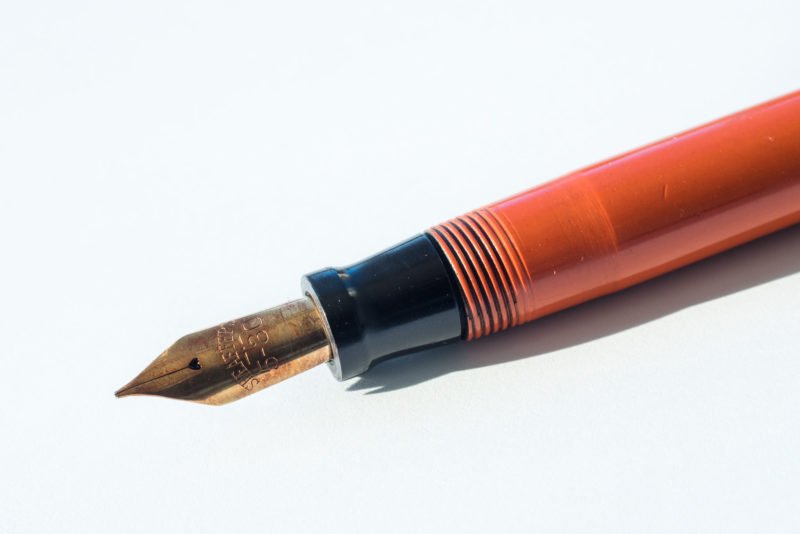 The light for this image was also window light. In this image the sun was coming directly through the window. Notice the dark, well defined shadows. 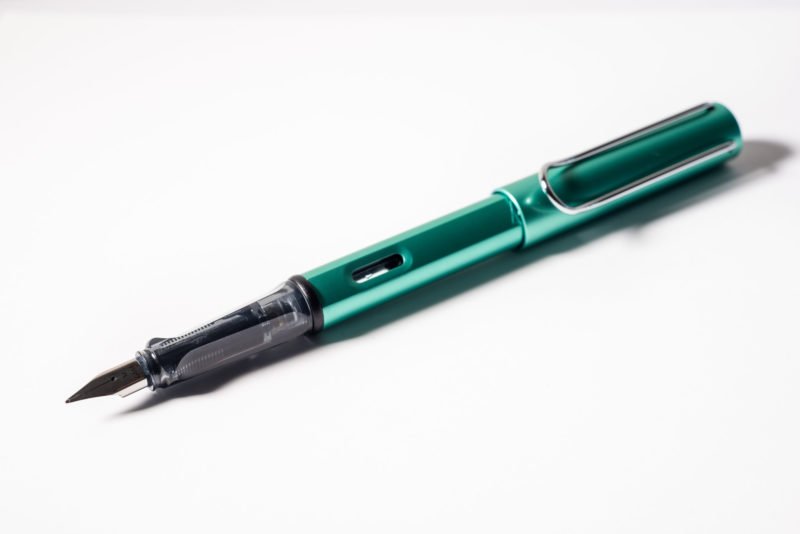 This image is light with direct light. Notice the dark shadows. 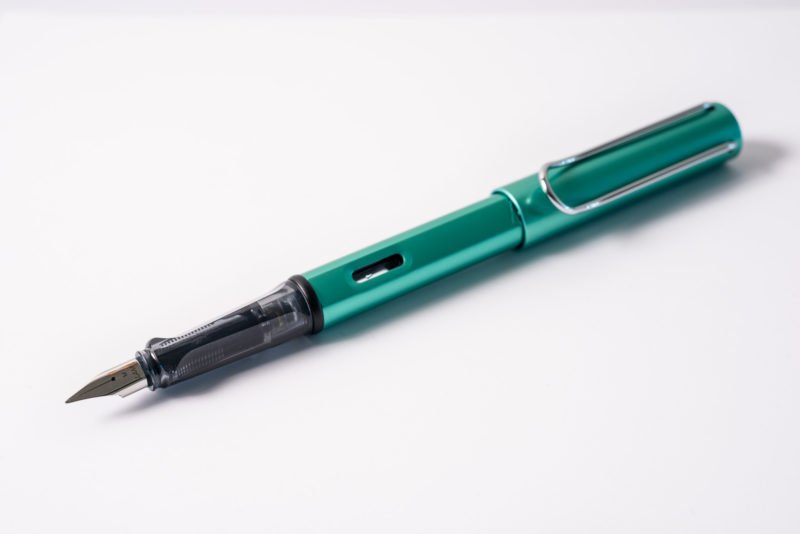 The light remained in the exact same place for this image, only it was diffused with a thin white towel.

Another common problem is shadows that are too dark. Even if you’re working with soft light, if you only have one source of light (such as a window) you can end up with shadows where you can’t see any detail. An easy fix for this is to reflect some light into the shadows. Ideally, you’ll use something that’s bright and colorless and not something that’s reflective (like a mirror or aluminum foil). This can easily be done with something as simple as a piece of paper. All you need to do is hold the paper just outside of the frame so that it bounces some of the light that’s illuminating the bright side of your pen onto the shadowy side of your pen. For closeup photos, this is very easy. For photos that show more of the scene, it will be harder to fill in the shadows since you won’t be able to hold the reflector as close to your pen. If this is the case, you’ll probably need to re-evaluate your light source or adjust your pen/scene until the light looks better. 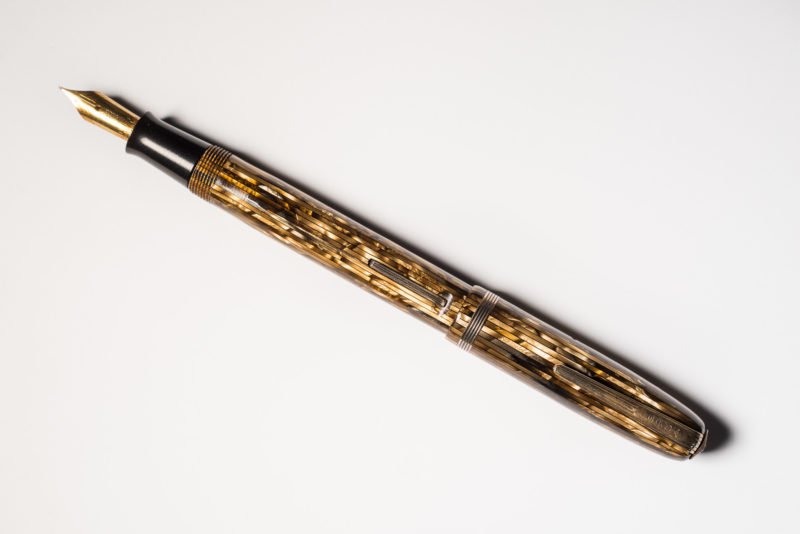 In this image you can see how dark and defined the pen’s shadow is. 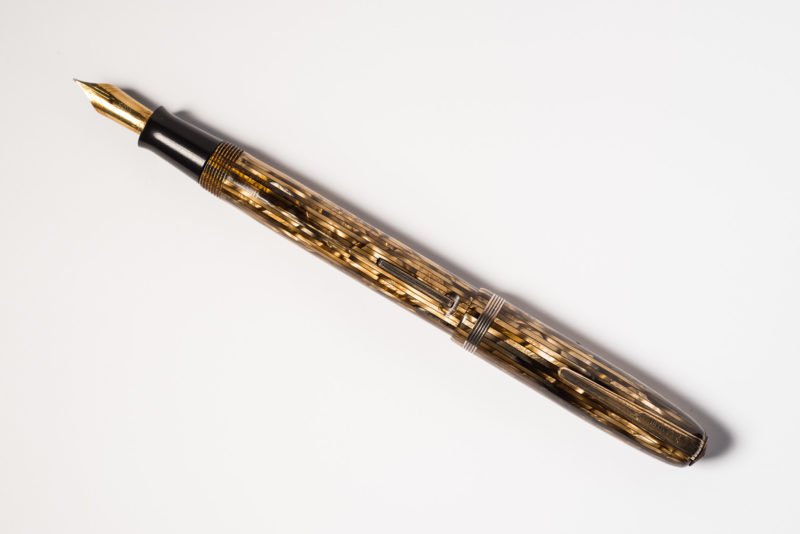 In this image I used a piece of paper to bounce some light into the shadows, making them less severe. 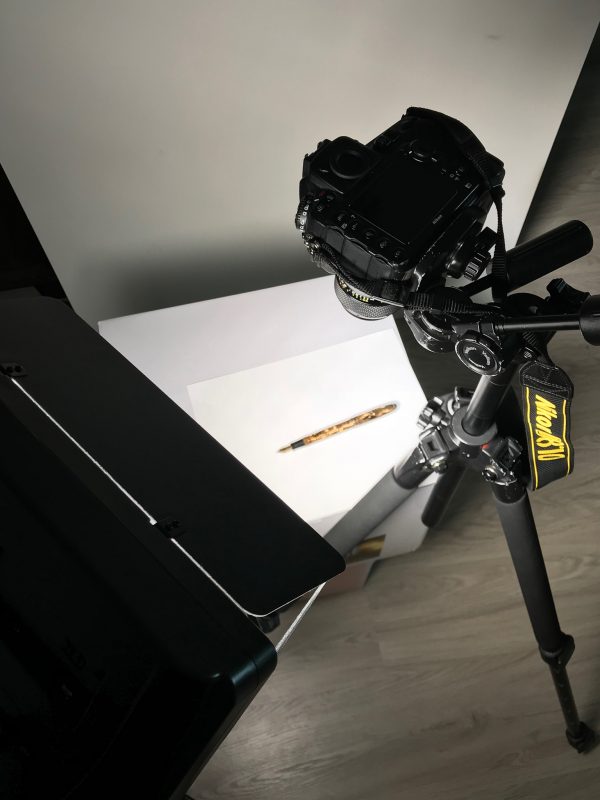 Setup with direct light and no reflected light 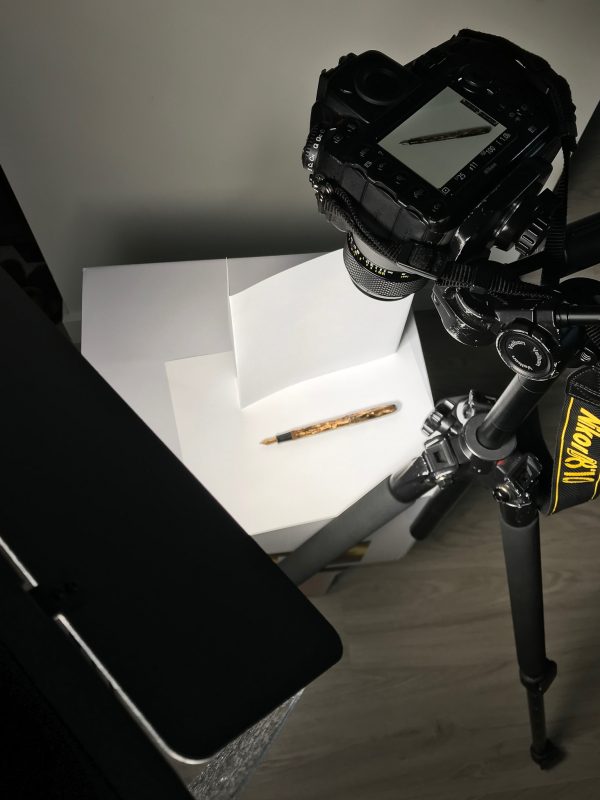 Setup with direct light and reflected light (notice the piece of paper that’s standing up).

Speaking of adjusting your scene, the angle of light makes a big difference as well. Since you’re usually somewhat restricted in your choice of light sources, the way the light falls on your pen will probably have the biggest effect on how your final image looks. Shadows can define shapes, but can also be distracting. Light can bring out details, but bright spots can detract from the image. Take a look at these two images. Although it’s the exact same scene, the image looks very different. The only thing that changed was the angle of the light. 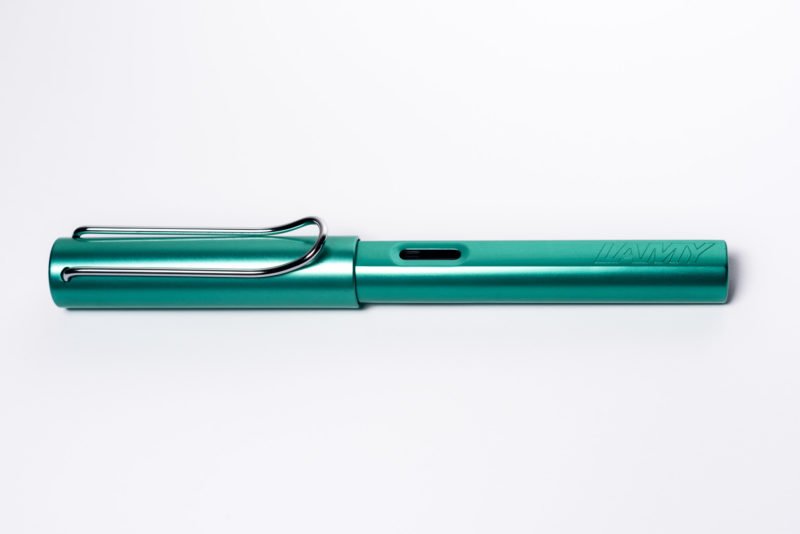 This image has flat light. The light was placed next to the camera and shined directly onto the pen. 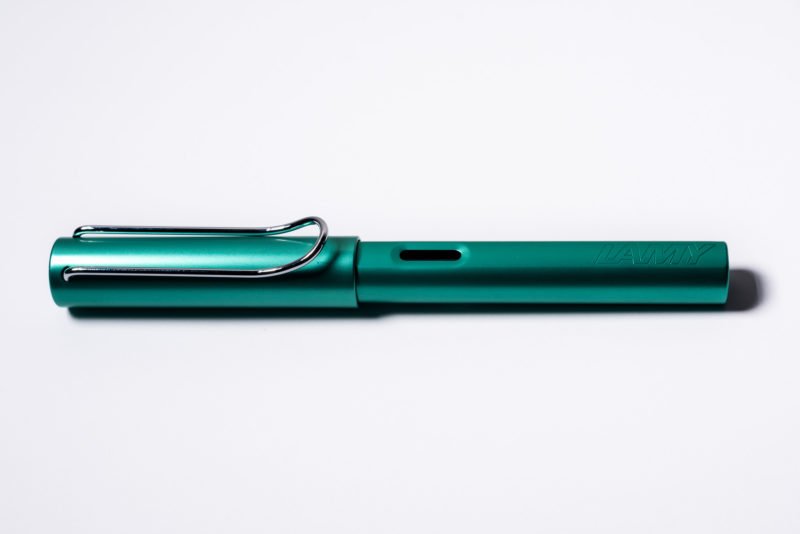 This image has side lighting. The light was placed to the left of the pen and camera.

Keep this in mind when you’re lighting your images. Flat light, like that in the first image, generally makes an image look clean and straightforward. It is typically characterized by having minimal shadows in the image. This can be achieved by having light fall on your scene from the same direction that your camera is pointing or by using soft light. Harsh light, like that in the second image, generally adds a bit of drama and interest to an image. This can be achieved by having your light source placed to the side of your scene or camera.

While all of the previous images were taken with a DSLR camera, here are some that were taken using the camera on my iPhone 7+. If you have good light, you don’t need an expensive camera to create attractive images. 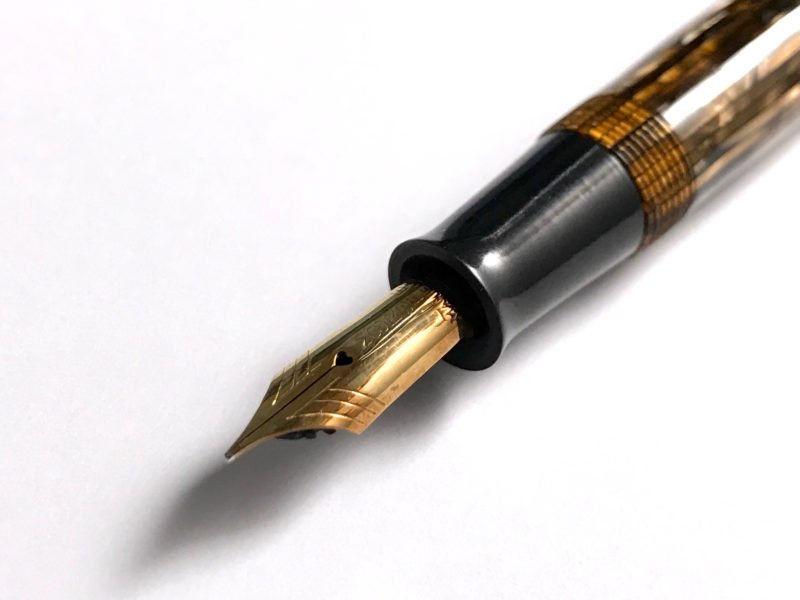 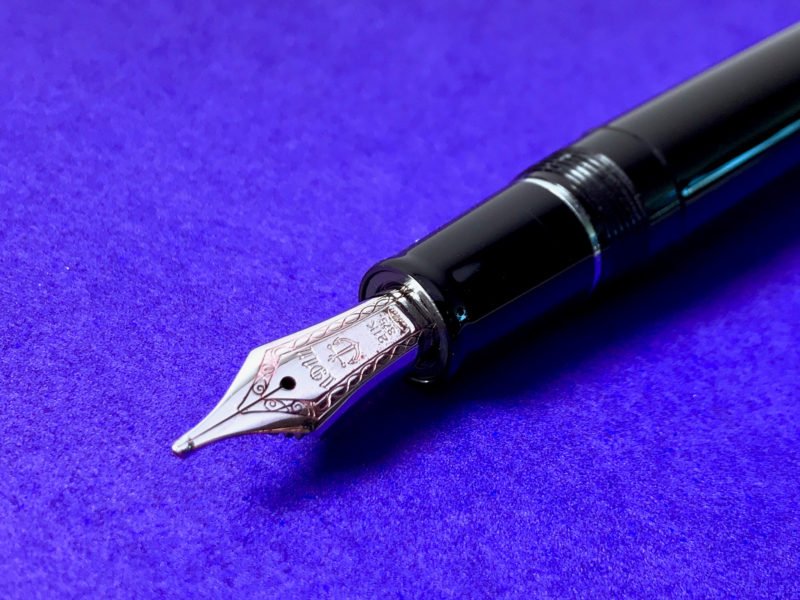 iPhone image with side light 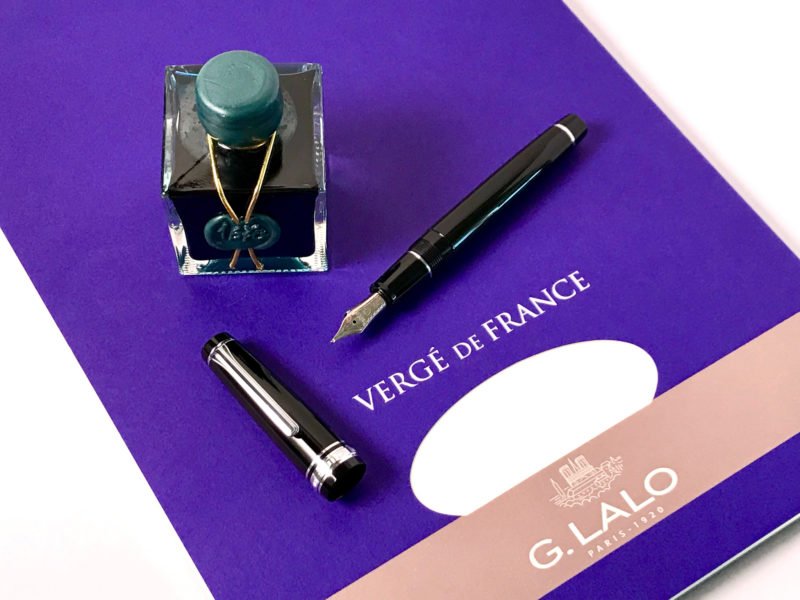 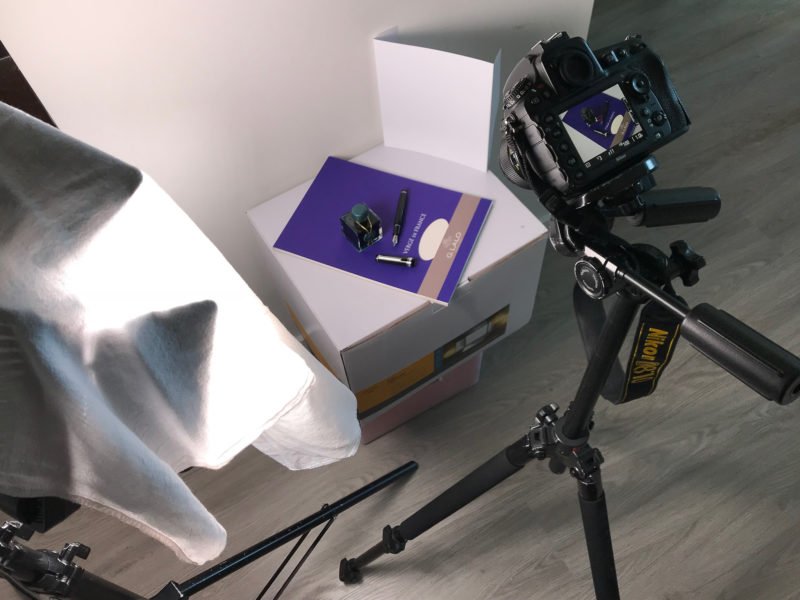 Here’s the setup. Notice the diffused light source and reflector to fill in the shadows.

As you have hopefully realized by reading this article, light is one of the most important parts of photography. It only makes sense to give it a lot of consideration before photographing your fountain pens. Having a good idea of how you want the final image to look can help you start out on the right foot with proper lighting. Whether you decide to use hard light or soft light, you should now know how to adjust the light in your scene to match the final image you have in your head.

In future articles I’ll discuss other photography topics such as choosing which cameras and lenses you use and editing your images. Until then, I’d love to see some of the images you create! Please feel free to leave your Instagram username in a comment. If you have any questions or run into any issues while photographing your pens, please don’t hesitate to ask for advice!