From time to time, you might see Rakuten Global Market mentioned as a place where you can get great deals on fountain pens or find pens that aren’t normally available in the United States. Indeed, Rakuten has a huge, almost overwhelming, selection of fountain pens and supplies. If it’s your first time visiting the site, there’s no doubt you’ll be overwhelmed and confused. I know I was! In this post, I want to walk you through the process of purchasing a fountain pen on Rakuten and what you can expect along the way.

It’s easy to go to the Rakuten site and assume that it’s the same thing as Amazon. This would make sense since Amazon is so familiar to everyone these days. It’s very important that the first thing you understand is that Rakuten is very different than Amazon. If anything, it’s much closer to eBay or a shopping mall that has individual sellers.

Rakuten is made up of many different shops. While you may be able to do a search for “Sailor Fountain Pen” and get hundreds of results, many of those results will be from different shops. In the image below, you can see below each pen the name of the shop that’s selling it: in this case Pen Gallery Hogado and Komamono Honpo. 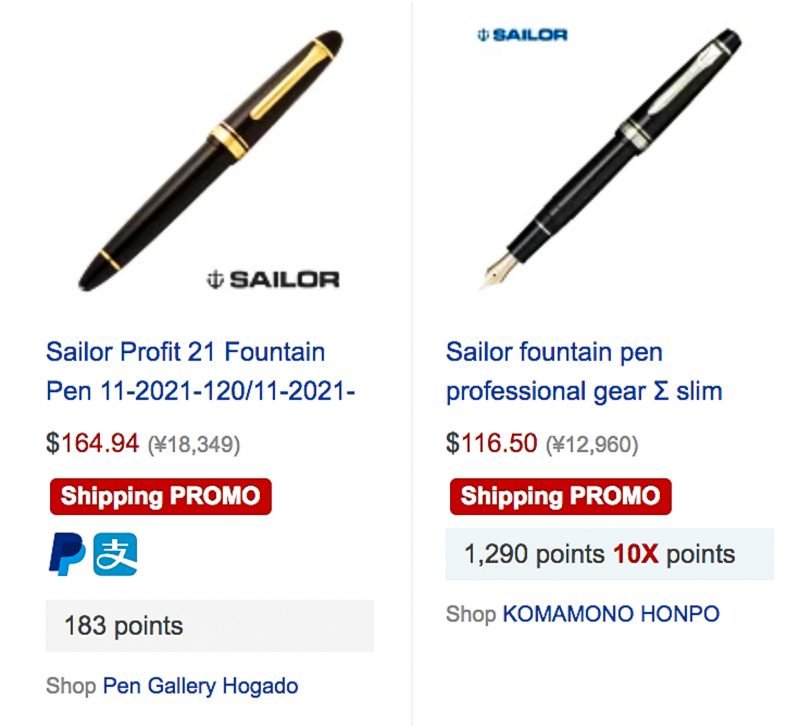 Here you can see search results that show different shops at the bottom of each pen image.

Here is the most important thing to know about shopping on Rakuten and the main way that it is different from Amazon: each shop ships its own items separately. This means that if you order a fountain pen from one shop and a bottle of ink from a different shop, they are not shipped together. They are shipped by each individual shop and you will have to pay shipping for each shipment from each shop. With a starting shipping cost of around $18USD, you can see how quickly any savings you’ve realized by purchasing directly from Japan will start to disappear.

This is especially important to note if you’re trying to take advantage of the occasional free shipping promotion that is sometimes offered. In the recent promotion I used, I needed to spend 12,000 JPY (or just a little over $100 USD) at one shop in order to receive free shipping. Now, when you’re talking about purchasing a fountain pen this isn’t hard to do, but that doesn’t mean you shouldn’t be smart about it. If you’re already ordering a pen from a shop and getting free shipping, you might as well pick up a few other things like some ink and paper.

Many different shops had the pen I was looking for, but I took the time to see what else each shop had before deciding where to purchase the pen. Once you’re “inside” a shop you can do a search of their products without seeing results from other shops. In my case, I also wanted to get some ink and some paper, but not all shops have a good selection of ink or paper. Furthermore, some shops that showed up in the search results and had a good selection of ink and paper were already backordered on the pen that I wanted. I didn’t want to find out how the backorder process worked with the free shipping offer, so I immediately crossed them off of my list.

Notice that the search box says “search in this shop”.

Eventually I found a shop that had the pen I wanted, but no paper. Fortunately they also had ink and some converters available, so I was able to add a few more things to my cart and feel like I was getting a good deal. Once I had my cart filled, I was ready to start the purchase process.

Ordering from Rakuten is not a complicated process. You’ll be asked to create an account and once that’s done it’s as easy as ordering from any other online retailer. Although Rakuten is made up of individual shops, the purchasing process is done through the main Rakuten interface, so regardless of who you buy from the purchase process should be the same every time.

One thing that I found to be a little confusing was that once I had completed the purchase process on Rakuten, I saw the following image that told me I’d need to reply to an email to complete the order:

I saw this message on the Rakuten site immediately after making my purchase.

Once payment has been made, the shop is notified and handles all future communication. In my case, I first received a confirmation email from Rakuten letting me know payment had been received and the shop had been notified, but no where to reply to complete my order. The next day I received two emails from the shop, one in Japanese and one that had been translated to English. Due to the translation, I was a little confused about whether or not I needed to do anything, but since there weren’t any links taking me back to the shop I decided to wait for the next email. 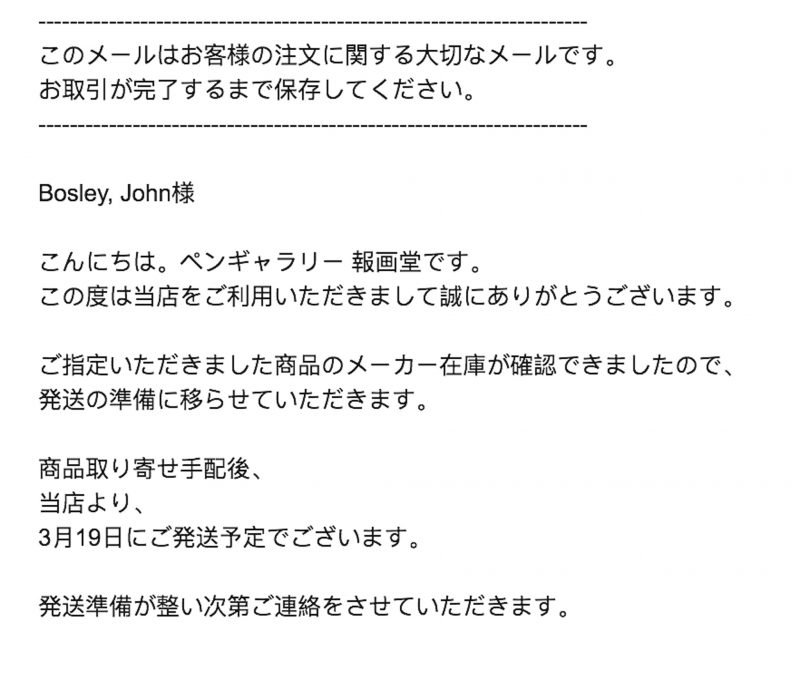 I received two copies of the next email, both in Japanese and English 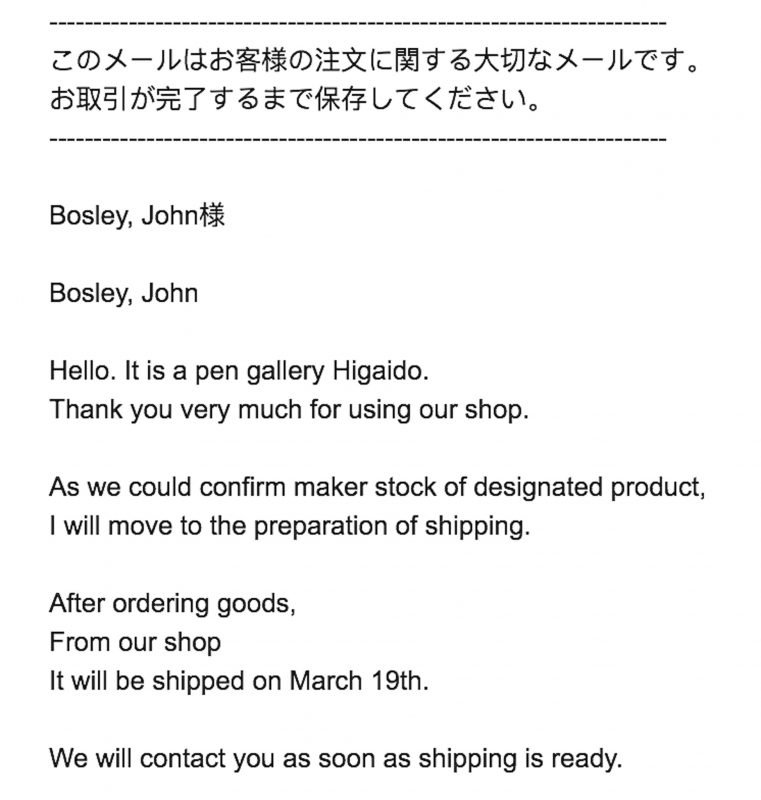 Here is the English version.

Later that evening, I received another email that was entirely in Japanese. Fortunately, Gmail offered to translate it for me. Again, I wasn’t really sure if any action was required on my part, mainly due to phrases like “because the change procedure was carried out, we will contact you” and “who put the name desired, please fill in here.” I figured the latter was a field for an engraving on the pen that I left blank when placing the order, but again, there was no link for me to follow so I figured all was still fine. Just in case, I checked my Rakuten account and the order status and it looked fine to me, so again I decided to wait and see what happened.

This is the email that confused me a little, mainly due to the wording.

A few days later I still had not replied to an email to complete my order, but I received another email in English that let me know my order had shipped! It even included a tracking number. At this point I knew my pen was on its way and the only thing left for me to do was wait. How long was that wait? I received the shipping confirmation email on March 17 and my package arrived on March 23, so it was less than a week! 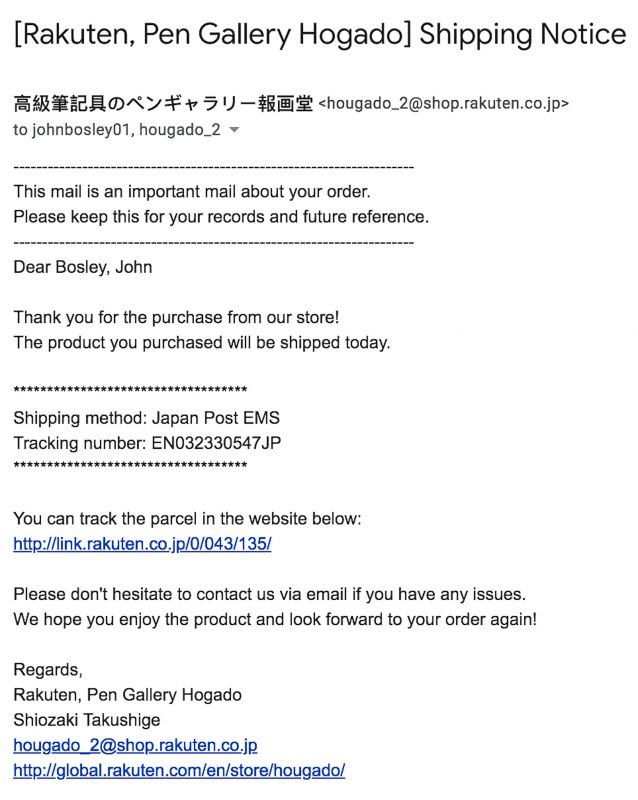 Without needing to do anything, my order had shipped!

When the box arrived, one corner was crushed, but thankfully the shop knew what it was doing when they packed it. The contents were wrapped up in bubble wrap and essentially suspended inside of the box with tape, so the inner package was nice and secure and in no danger from whatever smashed the outer box. I did have a moment of panic when I unpacked the box. In addition to a pen, I had ordered some ink cartridges and converters, but only saw one box of cartridges along with the pen. It wasn’t until I opened the pen that I found the rest of what I had ordered. The shop had actually put it all inside the box with the pen, which kept it from rattling around inside during shipping! Genius!

Things To Keep In Mind

It should be noted that, since they are independently owned, each shop probably operates a little differently. I would expect a similar process the next time I order, but maybe other shops send different emails or actually do require that you confirm an order. Shipping times are also going to be shop dependent, so it may take longer than a week for your goods to reach you.

Another thing to keep in mind is how much you may (or may not) save by purchasing something on Rakuten. In my particular order, between the inks, converters and fountain pen, I probably saved around $30USD compared to what I would have spent ordering them from a shop in the USA. While this is a good amount of money to save, I personally don’t think it would have been worth it without the free shipping. If I had paid for shipping my savings would have only been around $10USD. At that price, I’d rather support a local business and get everything much faster.

I hope this has helped you navigate the intimidating yet interesting site that is Rakuten Global Market. Overall my first experience was very good. I’m looking forward to the next free shipping event so that I can order some paper that isn’t normally available in the United States. Have you ordered from Rakuten before? If so, please leave a comment with your experience or any tips you have for other readers. Happy shopping!