If you’re planning on attending your first fountain pen show, there are a few things you might find useful before you step through the doors for the very first time. Whether you’ve been using and collecting fountain pens for less than a week or for many years, your first time at a pen show will probably be equally overwhelming. I recently attended my “first” fountain pen show (I had been to one many years ago, but as a vendor, so I didn’t really get to experience it from the other side of the table), and have quite a few tips to share.

What Is A Fountain Pen Show?

The selection of fountain pens can be overwhelming. 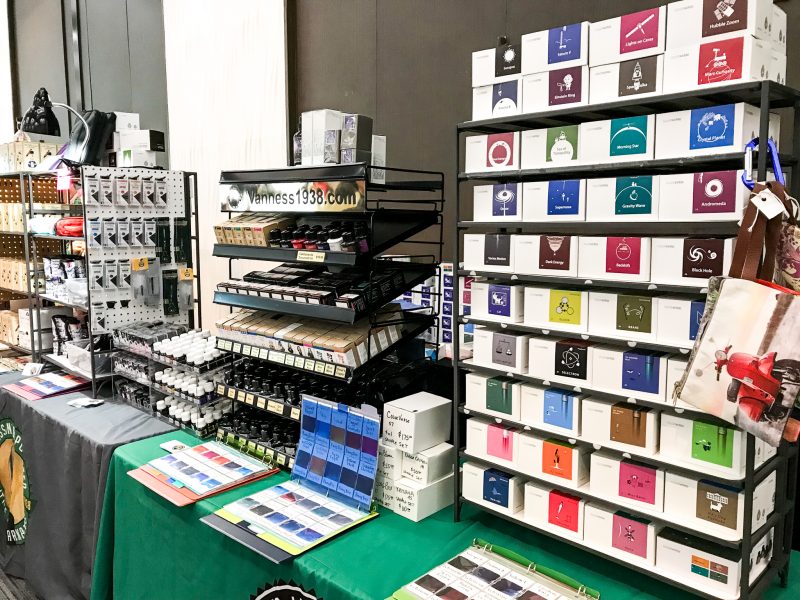 Pen shows also have plenty of ink available for purchase!

When you attend your first fountain pen show, you will be overwhelmed. It just can’t be helped. The sensation of walking through the doors into a room filled with rows and rows of tables covered in shiny pens, not to mention hundreds of people talking about and using pens, is enough to make any fountain pen user giddy with excitement. Then you’ll be faced with the daunting question of where to start? How does this work? Is there any etiquette I need to know about? This is where a little planning can be extremely useful. Here’s a quick list of some of the basics that will help you survive your first fountain pen show:

What should I bring to the show (and other basic tips)? 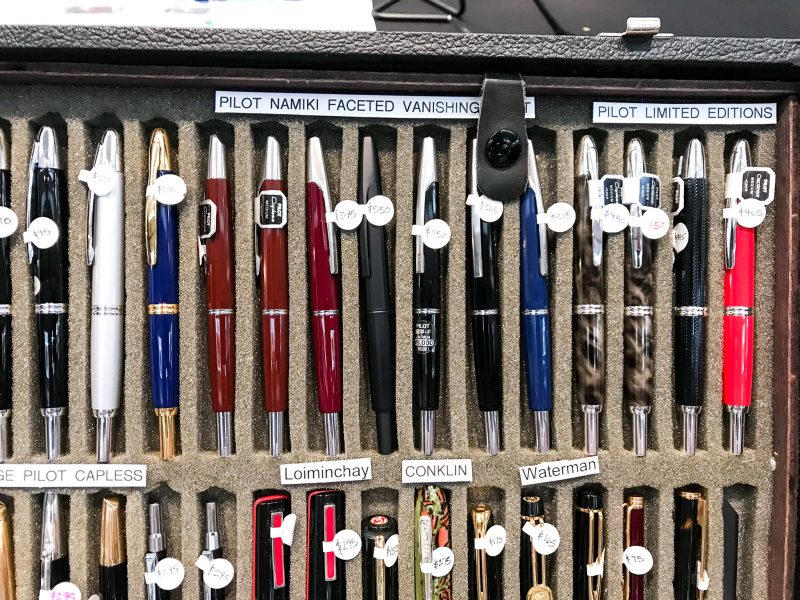 If you’re looking for a particular pen, you’ll likely have plenty to choose from.

What Else Goes On At Pen Shows?

While most people attend a fountain pen show to purchase fountain pens, there are many other aspects to a pen show that should not be missed. For example, at the San Francisco Pen Show there were many pen-related events that you could participate in if you wanted to step away from the buying side of the show for a while. For example, there were ink-testing stations set up throughout the show with over 700 different inks that you could sample. This provided a great opportunity to sit down for a few minutes, chat with other pen enthusiasts and try out some inks you’ve always wanted to use. 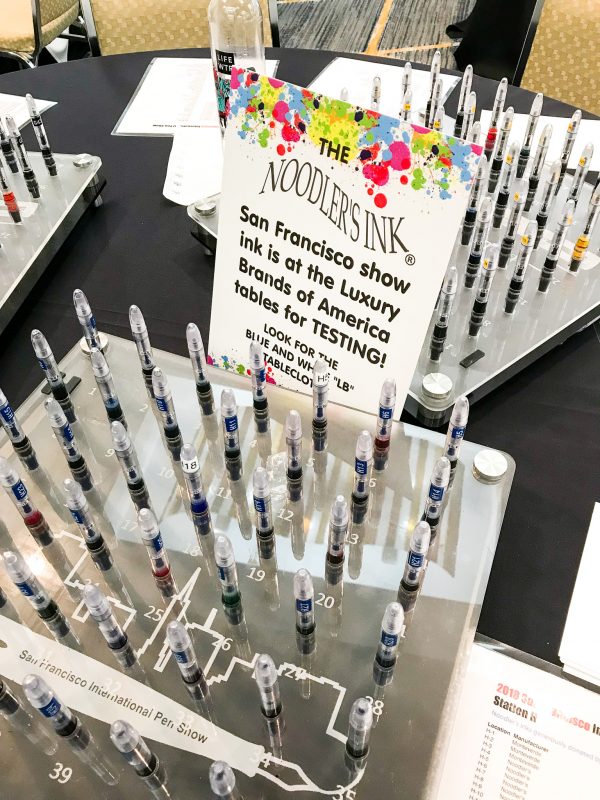 Ink testing stations allow you to try out almost any ink that you’d like.

On the educational side, there were various classes and workshops taught by some amazing pen people that you could either drop into or pre-register for. There was a pen dash (imagine educational speed dating) where groups of people learned about various fountain pen topics in 15-minute intervals. This gave attendees an amazing opportunity to informally chat with some past and current pen legends such as Paul Erano, Ralph, Leigh Reyes, and many others.

There were also some great social events. The first night of the show saw a pen auction that helped to raise money for the Pen Collectors of America. The second night of the show there was a social mixer with a live band! And, all throughout every day of the show, especially every evening after the show ended for the day, there were groups of people everywhere (but especially the hotel bar/restaurant) hanging out talking about, showing off and using fountain pens. 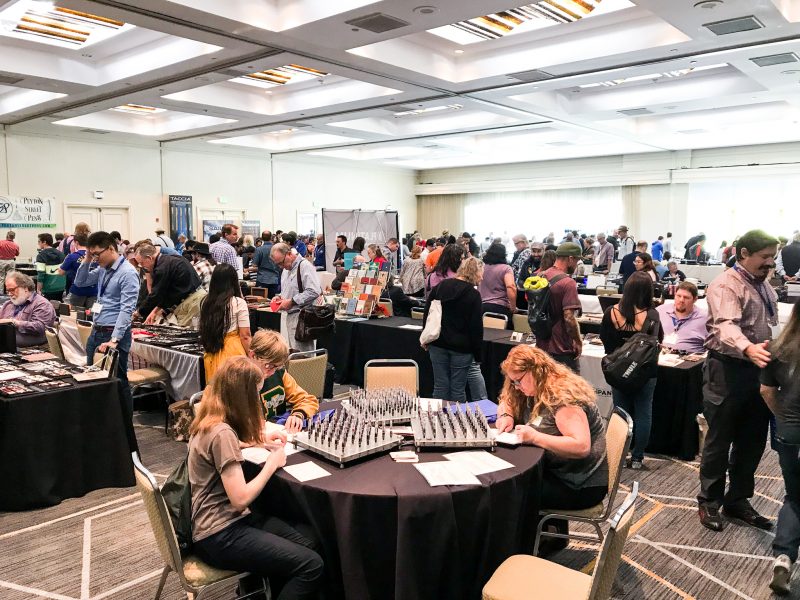 Expect lots of people at any given time during a pen show.

The social aspect brings me to my final point about attending your first fountain pen show. Don’t be scared or intimidated by all of the people at the show who might know more than you or who have a collection of pens that you can only dream of having. Pen collectors are typically very open, friendly and generous, so chances are if you walk up to a group of people you don’t know sitting around playing with their pens, you’ll be welcomed into their group with no hesitation. Furthermore, they’ll probably instantly trust you and gladly hand over their beautiful pen collection for you to try out. I know that it sounds crazy, but that’s just how it is!

Not only is hanging out with other pen people a great way to try out a bunch of pens and inks that aren’t yours, but it’s also a great way to learn a thing or two. Pen people love to talk about pens and love to educate other people about pens. If you have a question, ask it! If someone knows, you’ll probably get a very detailed answer. Furthermore, it might just lead to the beginning of a great friendship.

For many pen show veterans, the main reason to continue to attend fountain pen shows isn’t to buy new pens (although they always come home with a few), but the social aspect of meeting up with friends that they met at last years show or haven’t seen since a show earlier in the year. Just take a look around during the show and you’ll see people with huge smiles on their faces giving each other hugs and chatting about what they’ve been up to since the last pen show. It’s a very close-knit community and a wonderful one to be a part of.

When Will You Attend Your First Fountain Pen Show?

If reading through this has you really excited about attending your first fountain pen show, but you don’t know when or where any pen shows are happening, a quick google search should help you find a show close to you.

Personally, I had an amazing time at the 2018 San Francisco Pen Show. Having lived in SF for a few years and getting to know many of the people who put on the show, the show was a great mix of new experiences and seeing old friends. I was able to track down everything on my wish list and still stay within my budget! I made some new friends, got to try out some amazing fountain pens and came home with lots of new stuff to try out and review. Although I doubt that there’s anything that I can imagine “needing” in the next few months, I can’t wait for the Colorado Pen Show in early October. While I might pick up a few things, I’m super excited to take a class or two, see old friends and hopefully make a few new ones!

If you want to see more pen show photos, check out the Instagram hashtag #sfpenshow for lots of photos from this year’s show.