When I first heard that you could buy quality notebooks at CVS (a chain of pharmacy/drugstores), I was skeptical. I figured they might have paper that worked with fountain pens, but it wouldn’t be anything special. Still, I wanted to investigate and see how good the paper really is. A notebook only costs a few dollars, so I figured I wouldn’t be out much if it turned out to be mediocre. So what’s the verdict? Read on to find out. 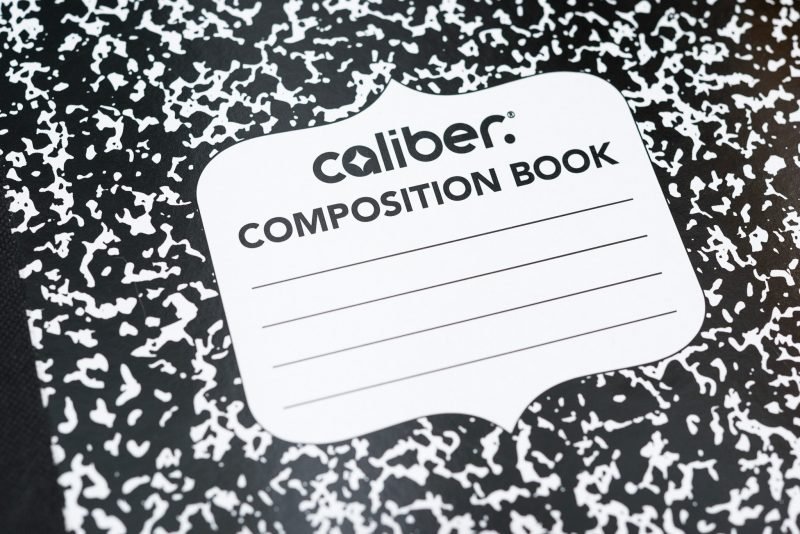 Here’s a detail of what the cover looks like.

My first impression of the CVS Caliber Composition Book was not that great. They look pretty boring, ordinary and uninspired. Regardless of what the outside looks like, it’s really what’s inside that counts. The paper is nice and smooth. To be honest, it kind of feels like a quality Japanese paper. It does have a bit of texture to it, but not so much that I’m immediately worried about it being rough to write on.

Here’s a bit of info about these notebooks

Let’s start off by talking about the cover. As I already mentioned, it looks pretty boring. It does have a few good things going for it, though. The cover material, while not what I’d consider a hard cover, is quite sturdy and stiff, so if you find yourself needing to write standing up or with it on your lap, it should still work fairly well. It’s also just screaming to be covered in some fun stickers. Inside the front cover there is a place to write your class schedule, but the material is glossy so something besides a fountain pen will work best here. Inside the back cover is a bunch of useful information such as common conversions, measurements and a multiplication table, so if you’ve ever wanted to know how much a barrel of flour weighs (196 lbs) or how many penny-weights are in an ounce (20), you’ll have your answers. 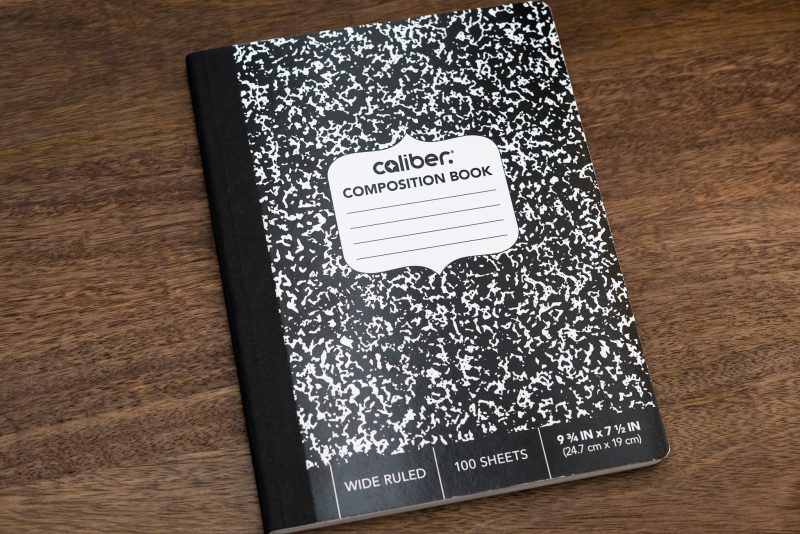 While the cover may be boring, the paper is anything but.

The notebook has a stitched binding, so it should hold up pretty well over time. The pages are fixed in the notebook and are not perforated or meant to be removed. Despite the stitched binding, the notebook is only one signature so it has a hard time laying flat when opened. Of course, with a little encouragement it will lay flat, but don’t plan to write much near the center of the book, as the pages have significant bowing. These notebooks only come with lined paper. 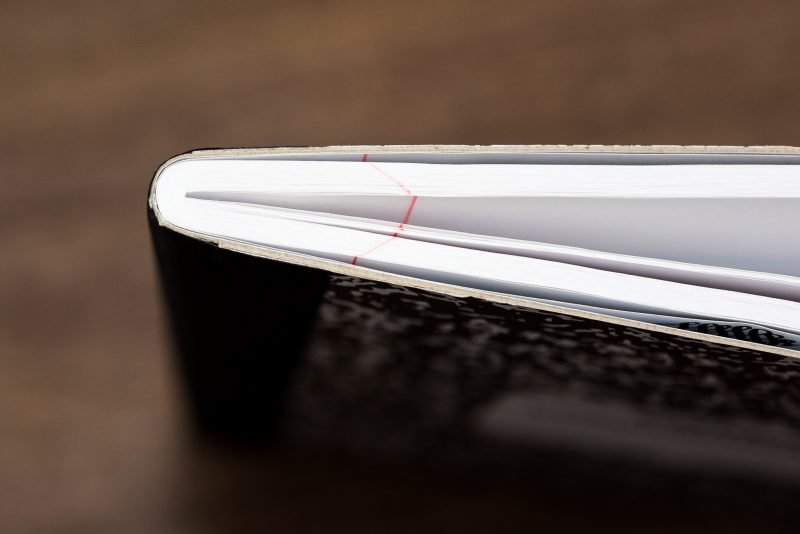 These notebooks are only one signature, so don’t lay flat very well.

Now let’s talk about that paper. I had heard good things, but wasn’t sure exactly what to expect from this paper. So I’m just going to say it: this paper performs very similar to Tomoe River. You read that right. From a pure performance standpoint, it actually scores higher than the 52gsm Tomoe River. It shows a bit less sheen, but has less ghosting and bleedthrough.

The Caliber paper has a bit more texture than Tomoe River, so writing on it you’ll feel a bit more feedback. It also feels a bit more dry to write on. I don’t know a better way to explain it, but writing on a premium Japanese paper like Tomoe River feels a little slick and smooth, whereas writing on the Caliber paper feels a little more dry, like your pen is about to run out of ink (even if it isn’t). The paper also seems to have a bit less contrast than Tomoe River, meaning inks don’t quite have the same color saturation or intensity, which probably also has something to do with the dry feeling.

Still, this paper performs very well. Sheen and shading are fantastic, I could see no feathering or bleedthrough and ghosting was average. Dry times were not good, but that’s typical for paper that performs well in all other areas. 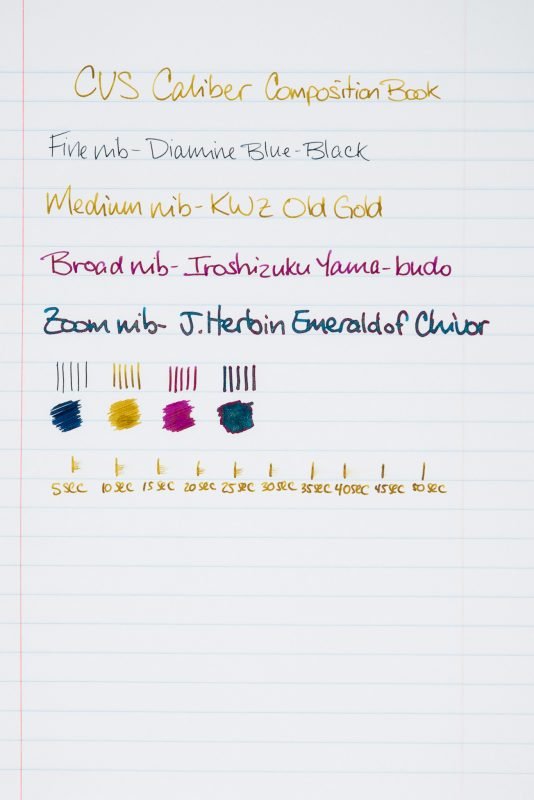 Paper Test – Front: Look at the sheen on Emerald of Chivor! 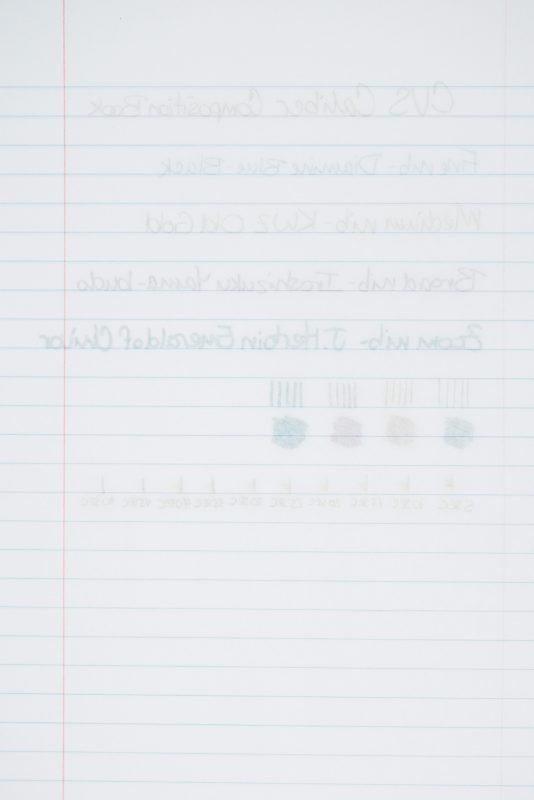 Paper Test – Back: There’s a decent amount of ghosting, but no bleedthrough.

One thing to keep in mind if you head out to pick up a notebook for yourself is that you should make sure to get one that’s made in Vietnam. I have heard people say that there are sometimes notebooks made in other countries and the paper is not the same, so a quick check on the back should help make sure you get the paper you want. Of course, selling notebooks is not how CVS makes money, so consistency in paper suppliers is not their top concern. With that being said, while CVS Caliber Composition Books are generally considered to have good paper, there is no guarantee that every single one will be the same or that they will always be fountain pen friendly. 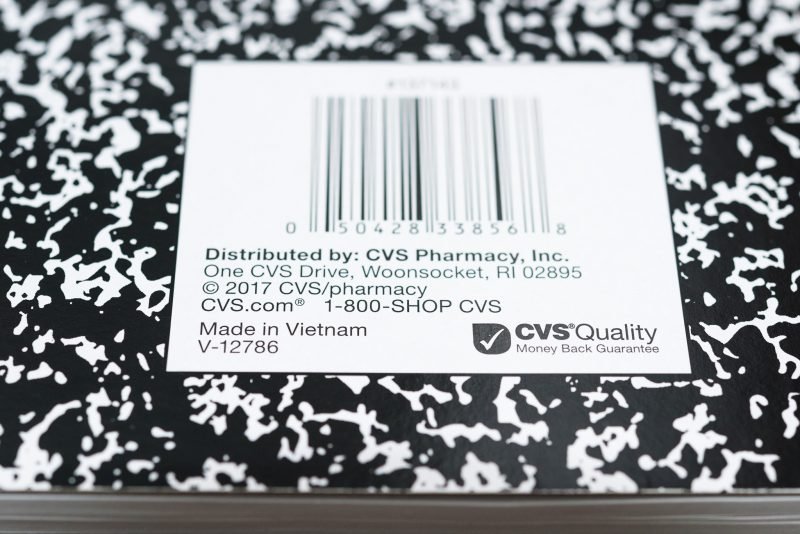 Make sure to check and make sure the notebook is made in Vietnam.

Finding fountain pen friendly paper that you can pick up at a local drugstore sounds like fantasy, but it is actually possible if you live near a CVS. In fact, from a cost/performance point of view, this paper rates in the top 5 I’ve ever tested, right up there with Black n’ Red, Life L, and Mnemosyne. You won’t find different size or page layout options, but the price is definitely right. Whether you’re a student on a budget or just want an inexpensive treat the next time you’re at the drugstore, consider giving a CVS Caliber Composition Book a try. 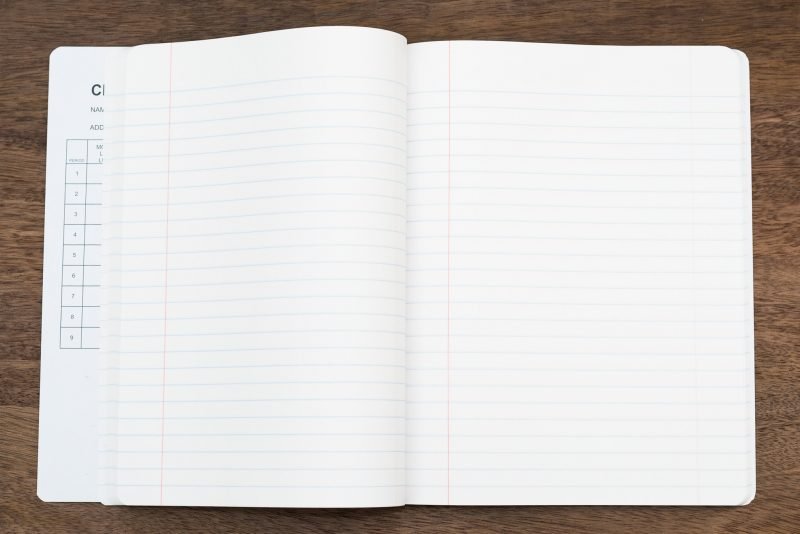 The paper only comes in lined options and looks like it’s student-ready.

Pros: Great paper at a very low price
Cons: Not very exciting, only comes in lined options
Value Rating: 3.57 Stars, Cost per A5 sheet: $0.04
Who this notebook is for: Someone who wants an inexpensive, no-fuss, fountain pen friendly notebook.
Upgrade to this notebook from: A cheap composition book
Upgrade from this notebook to: Clairefontaine Basic notebook