If you’ve been involved with fountain pens for any amount of time, you have probably noticed that the amount and variety of inks that are available has gone through an exponential growth in the past 10 years or so. Even if you’re fairly new to the world of fountain pens, you’ve probably noticed new brands and even colors of ink popping up recently. In this article I want to discuss all of the different types of fountain pen inks you’re likely to encounter. I’m not necessarily discussing each brand, but what the different styles of inks are that you’ll find on the market today. So, without further ado, let’s get to the current state of fountain pen ink!

Sheening inks have taken the spotlight in the ink world for the last few years and there’s a good reason why. Inks that sheen are visually interesting and are also typically highly-saturated, which leads to very rich colors. Just take a look at a few of these examples. 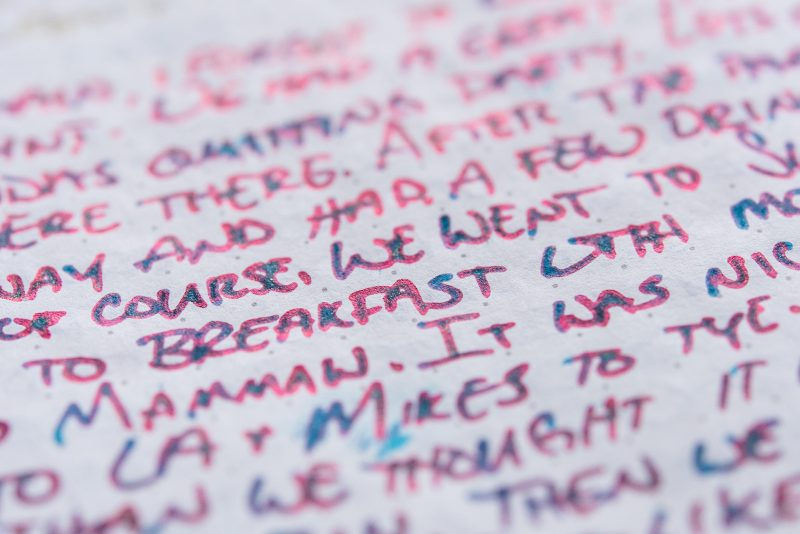 J. Herbin Emerald of Chivor has some fantastic sheen. 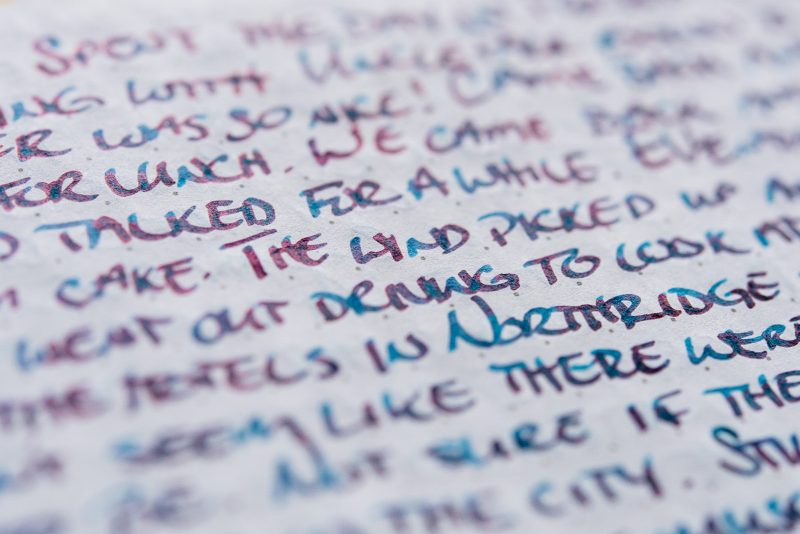 Iroshizuku Syo-ro shows subtle sheen when viewed at an angle. 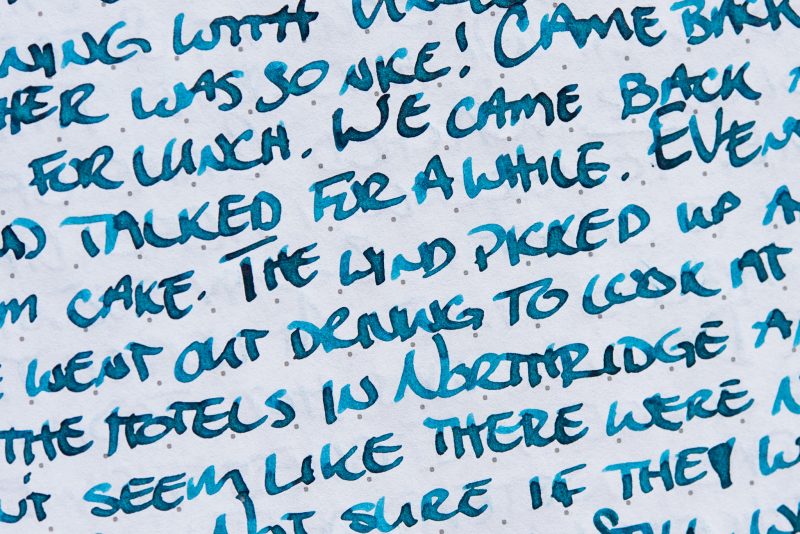 Iroshizuku Syo-ro, when viewed directly, shows no sheen but a bit of shading.

Compared to super-sheening inks (see below), inks with a regular amount of sheen still show a good amount of their original color. Some may have sheen around the edge of each letter, while others may have a lot of sheen where the ink pooled and no sheen where the ink was quickly absorbed into the paper. To complicate things even further, many inks will show sheen with some pen/paper combinations and not others, so if you buy an ink that’s supposed to have some sheen and don’t see any, try another pen or paper and see what happens.

Almost every ink manufacturer has a few inks in their current lineup that sheen. Some inks are known for their sheen, while others just happen to sheen under the right conditions. Some inks have vibrant, metallic-looking sheen while others have subtle, letter-enhancing sheen. 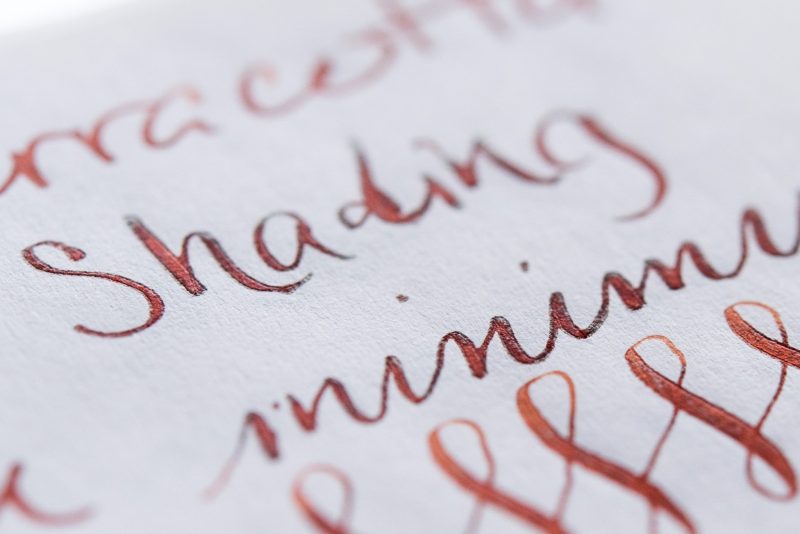 Diamine Terracotta has a dark sheen that adds to its complexity. 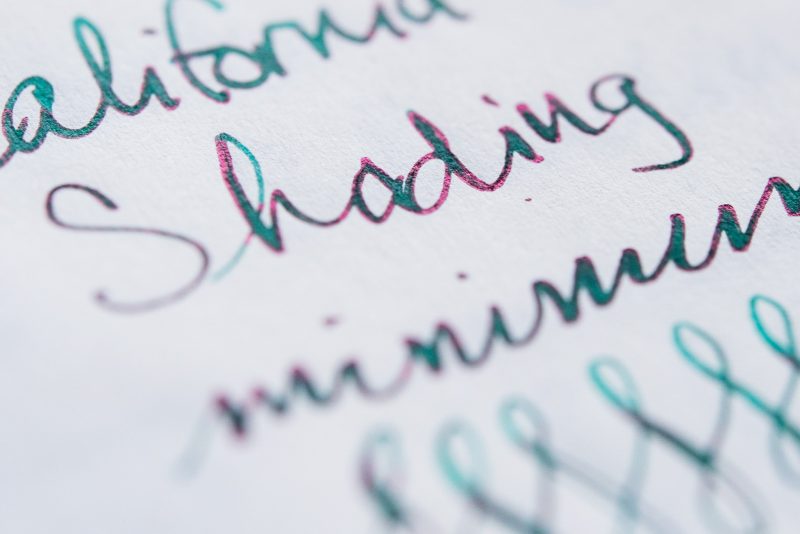 For any sheening ink, you’ll want to be sure to use good paper that will allow the paper to sheen. This usually consists of slower dry times.

Super-sheening inks are a special type of ink that should be used with some caution. While they may not be dangerous for most of your pens, they are not very suitable for the purposes of everyday writing, as I’ll explain later. First off, what are they? Super-sheening inks are inks that, when used, show little to none any of their original color and are all sheen. On paper they almost look like you were writing with metallic foil. 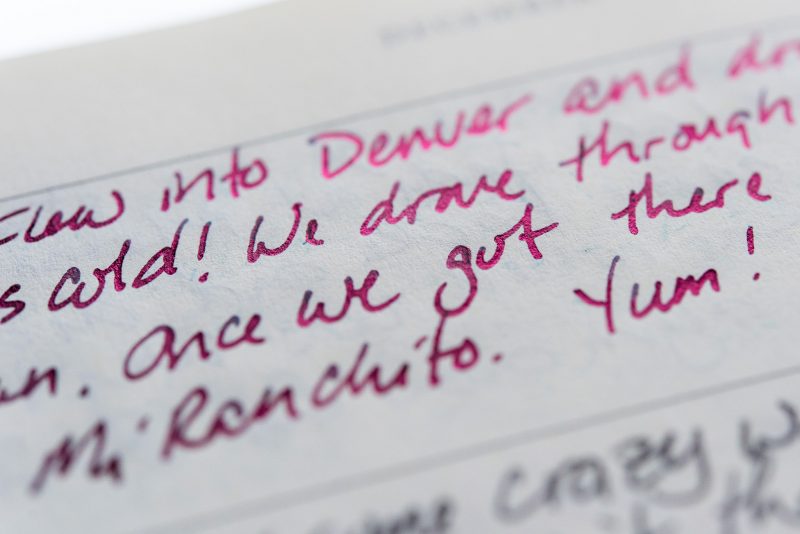 Organics Studio Walden has so much sheen, you can’t even tell what color the ink actually is.

Only a few ink manufacturers have super-sheeners in their ink lineups. Organics Studio is well-known for Nitrogen, Diamine has November Rain, Krishna has Sea At Night and KWZ just introduced Sheen Machine. There are others out there as well, but just seeing a few of these in action should give you a good idea of how crazy they can be.

The reason I say that they aren’t very suitable for everyday use is because of the amount of sheen they produce. Remember, sheen is caused by excess dyes sitting on the surface of the paper, so the more sheen, the more dye. Most of the time, this excess dye can still be smeared, even after the ink is dry. I have writing that was done in a journal with Organics Studio Walden Pond and it smeared a year after I had written with it. So remember, they may be fun to write with, but be wary of what you use them for. There is also a chance that, due to their high saturation, they might stain some pens. 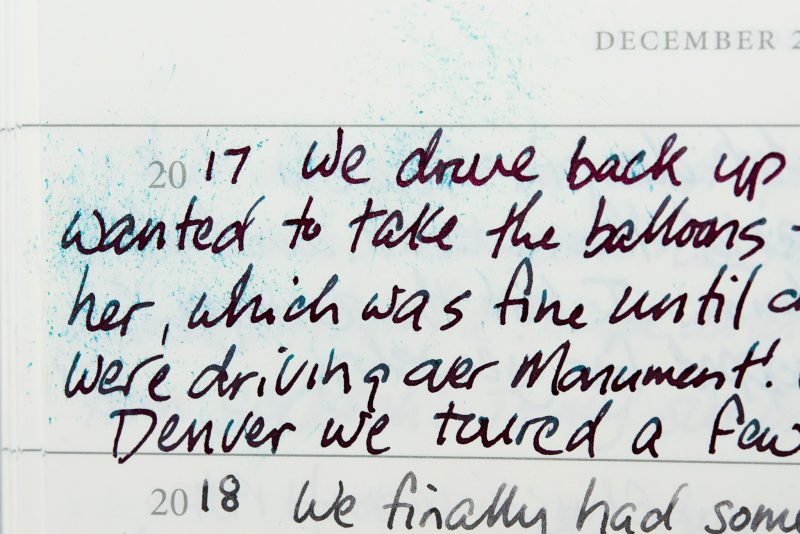 When I wrote in my Some Lines A Day diary a year later, my hand still smeared Walden from the previous year.

Inks with shading can be found in every ink manufacturers lineup and shading itself probably spans back to the invention of ink. Still, there are some inks out there that are exceptional shaders. These are the inks that I’ll call shading inks.

Shading inks set themselves apart from regular inks by how abruptly they shade. While many regular inks will show some shading, they don’t typically have strong transitions between dark and light. Shading inks can sometimes look like a special technique was used to make one half of a letter darker than the other, when in reality that’s just how the ink works. 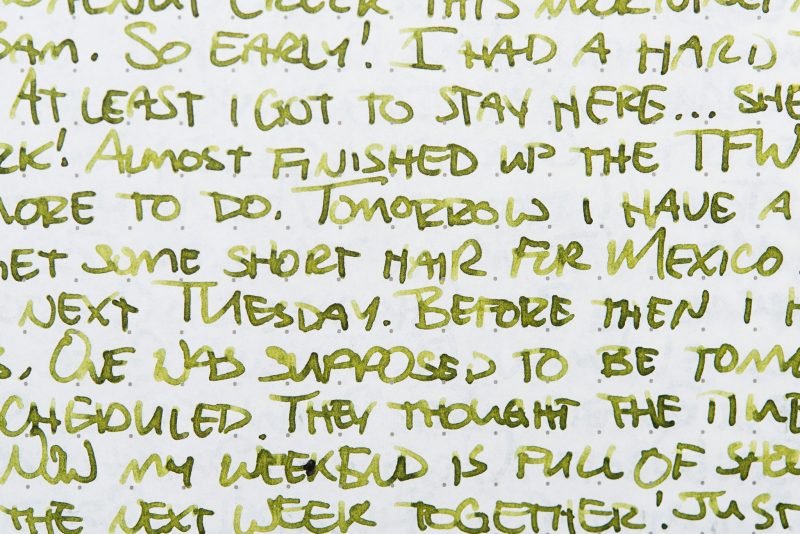 Rohrer and Klingner Alt-Goldgrun has nice shading, but is still easy to read.

Shading inks typically work best in a pen with a wetter nib and on paper with longer dry times.

Shimmer inks are a unique type of ink. Whereas shading and sheen are properties of the ink itself, shimmer is something that is added to the ink in order to make it sparkle.

Many different ink manufacturers offer shimmer inks in their lineups. Some of the more popular (and trusted) shimmer inks come from J. Herbin, Diamine and Robert Oster.

In my experience, shimmer inks work well with almost any pen or paper.

Desaturated inks are a relatively new style of inks. While most inks have been getting more and more saturated over the last decade or so, a more recent trend is for some inks to have a very desaturated look. While these are typically inks with a high amount of shading, they are much less saturated than more traditional shading inks like I discussed in the above section. 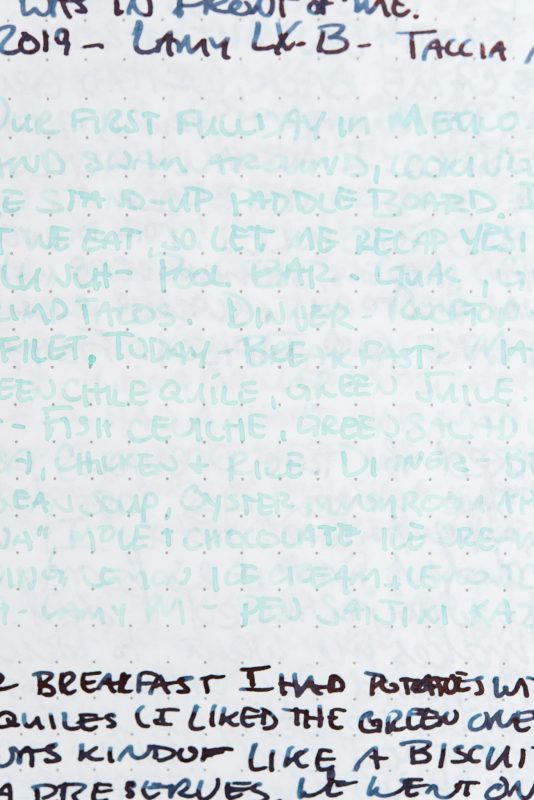 You can see how desaturated this ink is and how hard it is to read.

These inks may not be for everyone, but I personally really enjoy using them. In my experience, they require a pen that writes fairly wet and look best in a broader nib. If you want more shading out of them you’ll want to use a paper with longer dry times.

Regular (or monochromatic) inks, while they are fairly simple, can be more difficult to find than you might think. These are inks that display little to no shading and appear as essentially one solid color. It seems that most inks these days have some amount of shading or sheen, but it also depends on which pen you use. Many inks will not show as much shading with a fine nib compared to a nib that’s more broad. 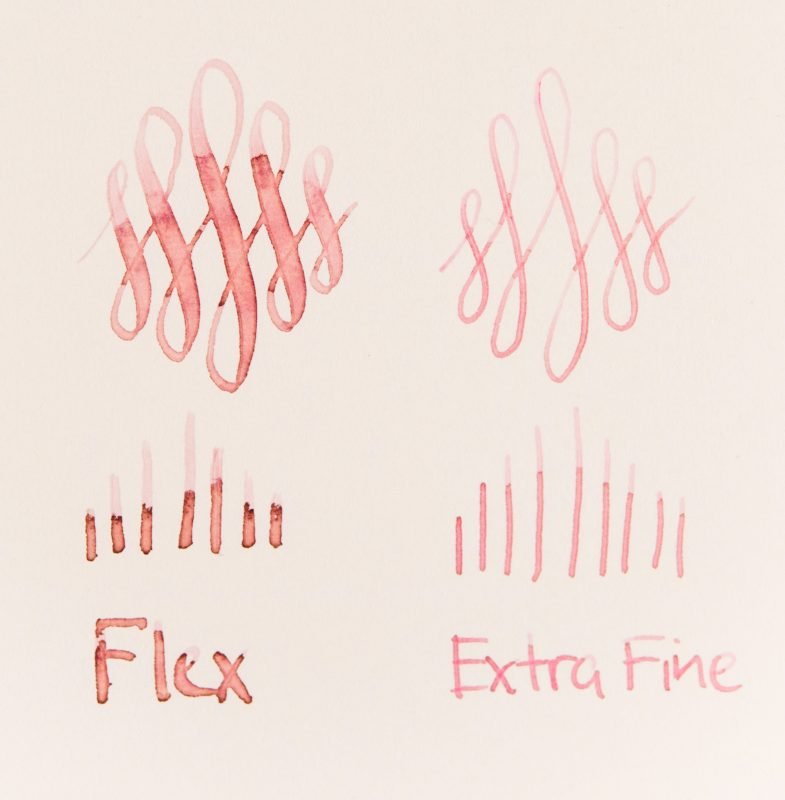 Pen BBS Rose Quartz shows much more shading in a wet, flexible nib than in an extra fine nib.

Regular inks, while not very exciting, might just be the easiest to read. Inks with sheen don’t necessarily make writing more difficult to read, but can be prone to smearing. Desaturated inks can sometimes be too light to easily read. Excess shading can trick your eye and, depending on how drastic the difference is between the light and dark parts of a letter, make your writing nearly unreadable. 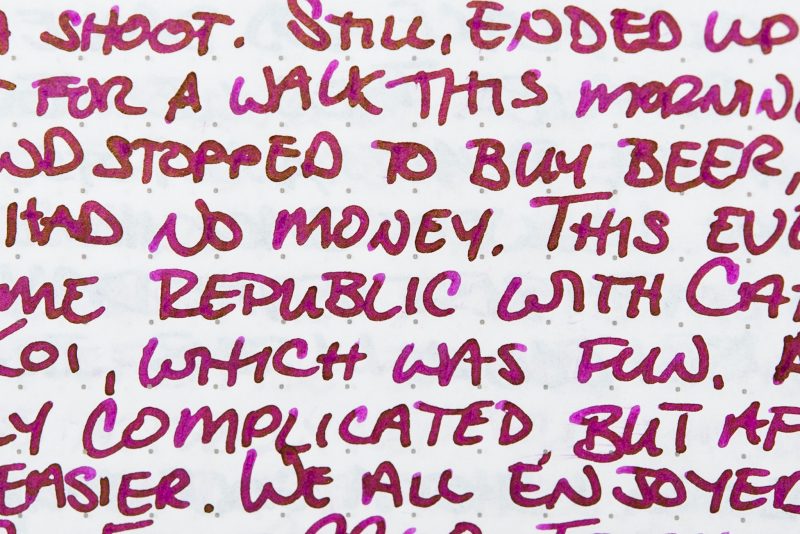 Iroshizuku Yama-budo has a bit of shading and sheen, but overall is a a fairly regular ink.

These inks tend to work well with with any nib type and with any type of paper.

These are the latest types of ink to hit the market. I’ve seen them referred to as “magic inks”, “unicorn inks”, and a few other names that sound fairly appropriate. I’ve found it best to refer to these inks as multichromatic inks. Whereas most regular inks only have one color (monochromatic), these inks will have multiple colors when dry (multichromatic). This is different from both sheen and shading, as sheen is more of a metallic overlay and shading is just a lighter (or darker) version of the inks base color. Many of these inks still have significant shading. 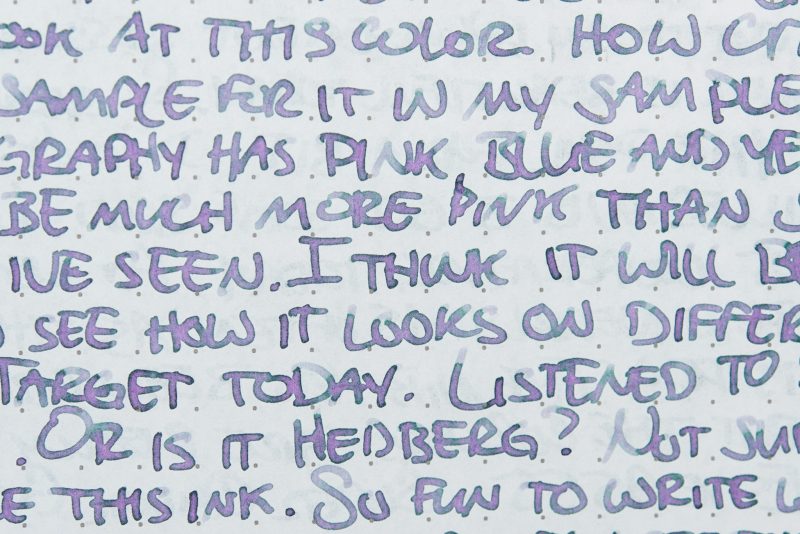 Sailor Studio 123 is a beautiful, multichromatic ink. How would you describe this color?

Multichromatic inks are the newest type of inks available to fountain pen users. The first one that really caught everyone’s attention was Sailor Ink Studio 123. Honestly, I don’t think anyone had ever seen anything like it and it took the fountain pen world by storm. There are a few other inks in the Sailor Ink Studio lineup that are similar, but 123 seems to be the most popular one. Since then, other smaller ink manufacturers have come out with similar inks, most notably Troublemaker Inks and Vinta Inks.

In order to get the most out of these inks, you’ll want to use a wetter nib and high-quality paper with longer dry times.

There are times when an ink needs to do more than look nice. For people who work in professions that require secure writing or individuals who want their writings to endure the test of time, there are permanent inks. Many manufactures make inks that are permanent and they will typically be labeled as such, but this isn’t always the case. For example, one of my favorite permanent inks, Platinum Carbon Black, doesn’t specifically say anything about permanence on the box or bottle (although the box does say it has excellent resistance to water and light, but only in Japanese).

Another brand that is well known for permanent inks is Noodlers. They have inks that are appropriately named Bulletproof. As they say on their site,

Sounds pretty permanent to me.

I’m going to lump the rest of the inks that are out there into the specialty inks category. This includes highlighter inks, UV-reactive inks and scented inks. These inks are not widely used or offered, but are still available if you’re interested.

Highlighter ink, while not necessarily good for everyday writing, is still something that’s available if you need it.

There you have it. That’s the current state of fountain pen inks as we approach 2020. It’s nice to see that there should be something for everyone out there. It’s also encouraging that there are still new developments in the world of fountain pen ink, as has recently been demonstrated by multichromatic inks. What other surprises will ink manufacturers have for us in the coming years? We’ll just have to patiently wait and see. Until then, it’s good to know we have plenty of ink options to tide us over.