First and foremost, the AL Sport is a good writer. If a pen doesn’t write well, I’m not going to use it very often. This particular pen came with a fine nib. I’m not a fan of fine nibs, but that was the only option, so I had to make due. While it wrote well, I wanted it to have a wetter, broader line, so I made a few adjustments that gave me the writing experience I wanted. While it is no longer stock, the adjustments I made were simple and performed by me, so I’d say just about anyone could achieve a similar result if they wanted to. One nice thing about Kaweco nibs is that they are fairly inexpensive, so replacing one is not a huge deal.

I find the pen to be extremely satisfying to hold. The brushed aluminum finish feels very soft and smooth. I personally prefer the aluminum body to either the steel or brass, as both are significantly heavier than the aluminum and the brass makes my hands smell strange. I also have one of the plastic Kaweco Sports, which I like, but the AL Sport is so much more substantial. I feel like it is a pen that will easily provide a lifetime of use.

Not only is the pen satisfying to hold and touch, but the quality of the construction can not be overlooked. I’m sure it’s simply because it is machined metal, but the threads are very smooth and tight. Unscrewing the cap is always enjoyable and sometimes I find myself just spinning it off and on again when I’m using it. The threads that join the body to the section are also quite nice, although in my opinion the cap threads are the best. They also seem to seal up the cap pretty well, as I’ve never had issues with the pen drying out if left for too long without use.

Inside the pen, things get a little disappointing. As you may already know, with Kaweco Sports some of your only filling options are a cartridge or a squeeze bulb filler. There is also a piston and a syringe converter, but I haven’t tried them. Having to refill an empty cartridge every time I want to fill the pen is not nearly as convenient as having a built-in filling system. I know that there are obvious size restrictions inside the pen that prevent it from having a proper filling system, but it’s definitely something to keep in mind. 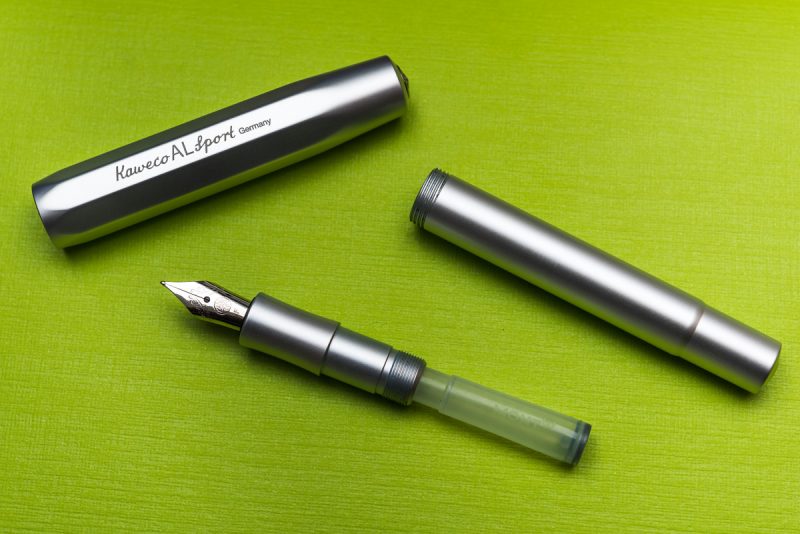 Here is the disassembled pen. You can see that the barrel is barely larger than the cartridge.

The Size and Other Thoughts

I am not an oversized pen kind of guy. My entry point to fountain pens was vintage pens, none of which were overly large. That is typically my reference point, which means I don’t go in for many of the huge pens that currently seem to be so prevalent. Still, the Kaweco Sport series are very small pens. With that being said, I don’t have a problem using it. I rarely post my pens, but I’ve found that when I post a Kaweco Sport it is very comfortable to write with. I also don’t worry about scratching up the barrel with the cap since it is made of aluminum. 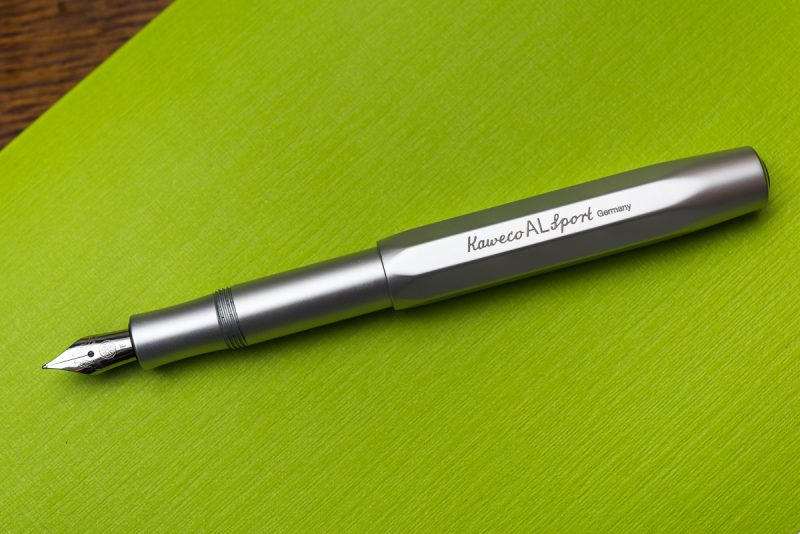 This small pen is very usable when posted.

I know that optional clips are sold for these pens, but I have never felt the need to use one. The octagonal cap keeps it from rolling around on flat surfaces and this pen is small and sturdy enough I don’t mind keeping it in my pocket. Speaking of caps, the top of the cap has a pretty sweet Kaweco logo on it. 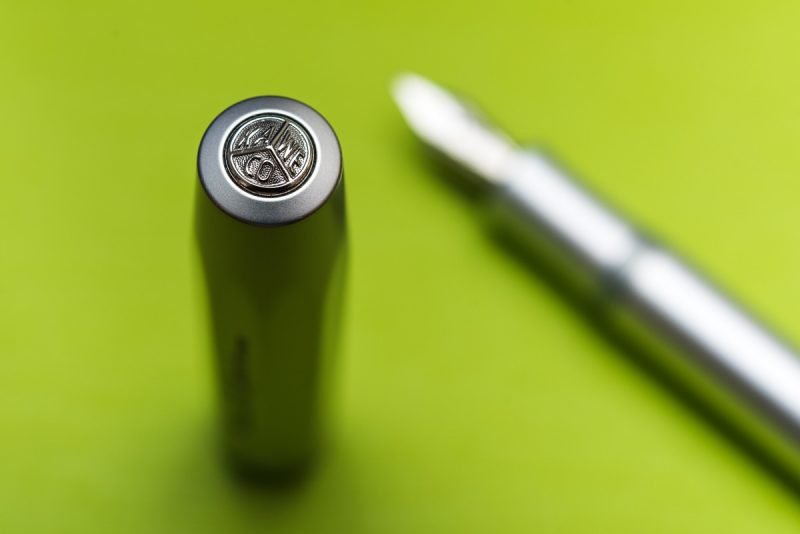 The logo on top of the cap looks great.

If you haven’t already guessed, I love my Kaweco AL Sport. I’m not very interested in owning any other plastic Sports, but I’d love to eventually pick up another one or two AL Sports in different colors. They look good, feel great in my hand and are very well made and sturdy. If I ever lost this one, I’d definitely replace it. That’s not something I can say for all of the pens that I own. While it is much smaller than most pens, it is very usable. If you have a regular Kaweco Sport and like it, I would highly recommend picking up an AL Sport. If you’re looking for a small, well-made and relatively inexpensive fountain pen, I don’t think you can go wrong with one of these. 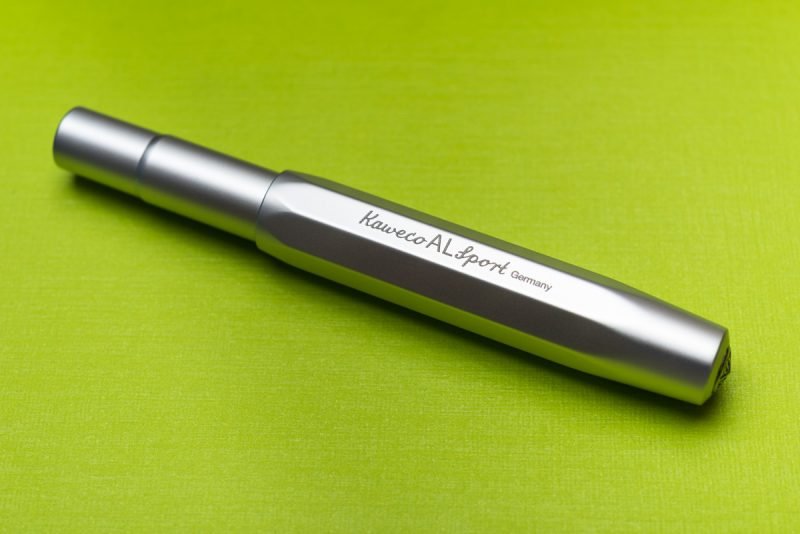 When capped, the pen is quite small. 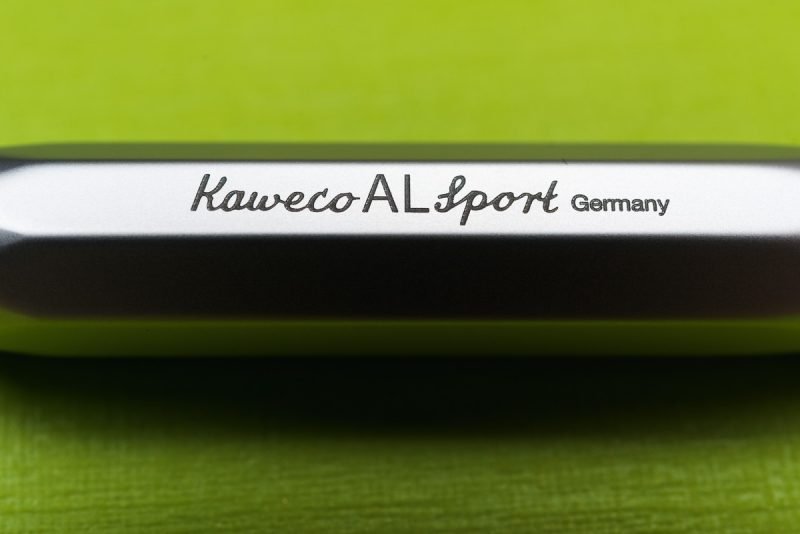 Here’s a close look at the engraving on the cap.