The next fountain pen from my collection that I want to share with you is quite different from the previous two pens I’ve featured. While the Lamy AL-Star and Kaweco AL Sport are both relatively inexpensive pens that many people may own, this pen is fairly expensive and is one that you don’t see nearly as often. If you read the title, you’ll know I’m talking about the Montblanc Meisterstück 149 fountain pen.

How I Came To Own This Pen

Before I get into any pen specifics, I want to tell you the story of how I got this pen. It’s probably not one that I would have ever purchased for myself, but there is sits, between my Esterbrooks and Lamys.

When I started using fountain pens, I was pleasantly surprised by how many family members who I told about my hobby had a few stashed away that they were happy to give me. I have to say, my family has pretty good taste in pens. One aunt gave me her Parker 51 and Parker Vacumatic that she used in college. Another gave me an Eversharp Doric pen/pencil set, although it unfortunately succumbed to celluloid rot and was falling apart. I also received some random Esterbrooks and other various pens. The biggest surprise, however, came from my grandmother.

One day I was at her house and we were talking about fountain pen memories. She mentioned that she still had my grandfather’s fountain pen somewhere and that she’d look for it while I was there. Of course, this was a very nice surprise and something I hadn’t expected. Still, I kind of forgot about it over the course of the day as we were busy doing other things.

Later that evening she said that she had found his pen! I always try to keep my expectations low when someone says that they have a pen for me, as I am always overjoyed to receive any pen that was owned by someone I know, regardless of how “valuable” or “rare” it is. She handed me a pen box in an unmarked cardboard sleeve and said, “I think it’s a Montblanc.” “Ha,” I thought to myself, “she probably just heard that name somewhere and said it because it sounded familiar.” My grandfather worked at a bank but wore overalls at home and loved to go fishing, so he wasn’t what I would consider to be the Montblanc type. So, with some intrigue but little hope, I took the pen box from her to see what was inside.

As I pulled the pen box from the outer sleeve and saw “Montblanc” stamped into the top, I still thought that it was probably just a Montblanc box with some other type of pen inside. But then I opened the box and saw the white star on top of the cap! My heart skipped a few beats and I had to set it down, as I instantly became worried I’d drop and break it. Once I recovered from the initial shock, I took it out of the box and looked at it. It was big! At this point in my collecting, I’d never actually seen a Montblanc in person, but I knew where to look for the model number. I rotated the pen in my hands and looked for the model number on the cap band. When it came into view, I did a double take. Does it actually say 149? Did I just inherit a Montblanc 149!? 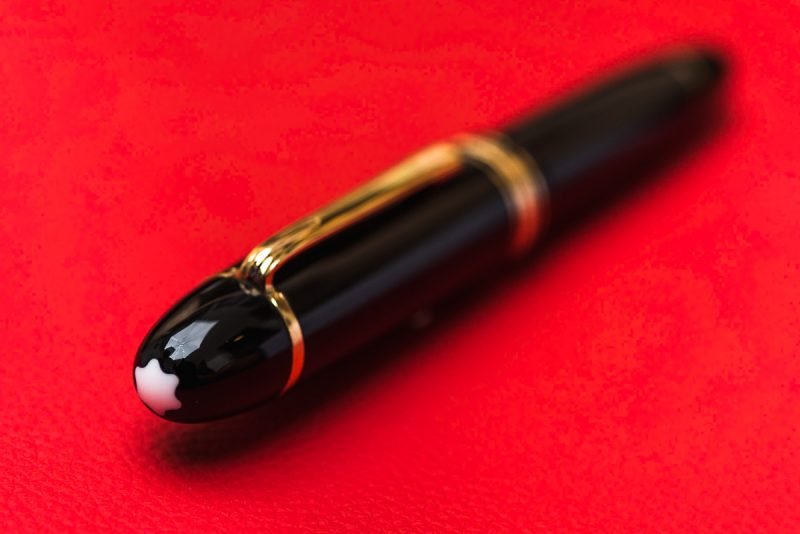 This cap is immediately identifiable to most people. 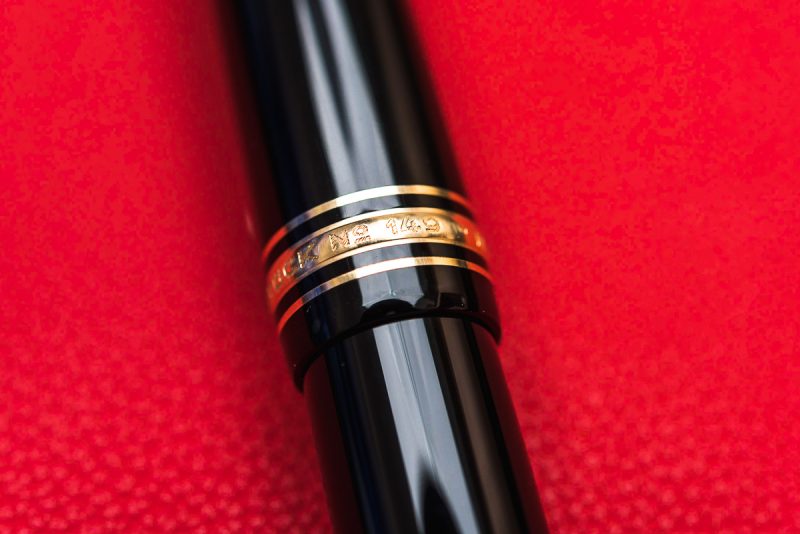 The model number is found on the cap band.

I asked my grandmother where my grandfather got it from. Apparently, one of his nephews lived in Germany for a while and sent it to him as a gift. He wanted a pen that he could use for signing documents at the bank, so this is what he got. From what I could tell, it wasn’t used much. The box and everything that came with it is still in great condition. The dry ink that was in it was a yellow-brown (I think it was probably Skrip Kings Gold), so I always try to use brown ink in it as an homage to my grandfather. 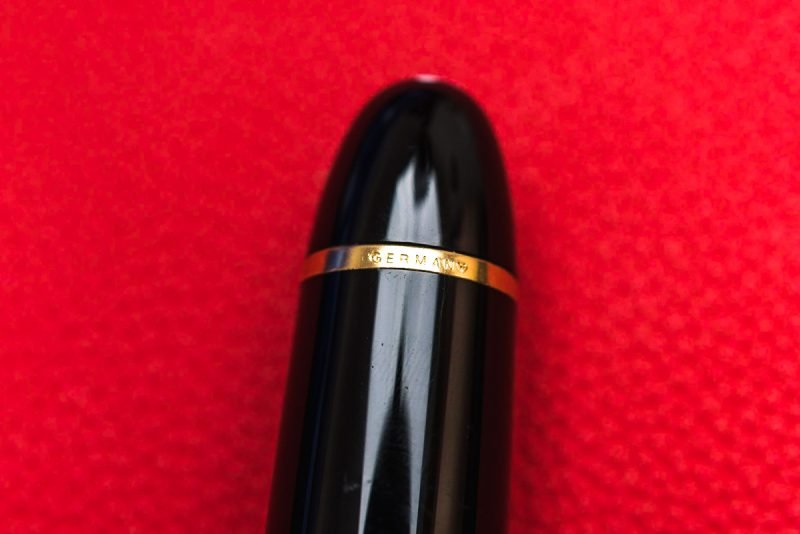 The country on the clip band can be used to help date the pen.

That’s enough story time… let’s talk about the pen itself. As you probably know, the Montblanc 149 is one of those iconic fountain pens that everyone seems to have an opinion about. For some it is a grail pen, while for others it is an overpriced status symbol. As I said earlier, it is not a pen that I would have purchased for myself. I don’t have anything against it per se, but I have a hard time spending that much on any fountain pen.

What makes it an iconic fountain pen? For one thing, it has been around since the early 1950s. Can you think of many (or any) other fountain pens that have been continuously produced since then? I’m not sure I can. Longevity aside, Montblanc has always been known as a luxury brand. With the 149 sitting at the top of the company’s regular pen offerings, many see it as the best of the best. It is also a large pen, so at a time when most fountain pens were significantly smaller, it surely stood out in comparison to other pens. Not being a Montblanc expert, I’m going to stop there, but I’m sure that if you’re interested, with a little research you can find many stories that will add to the mystique of the 149.

Let’s look at the pen itself. It comes in black and has either gold or platinum-coated trim, so not exactly the flashiest pen on the market. The large, #9 nib (that’s what the 9 in 149 stands for) is two-toned Au 750 (18K) gold. It’s a piston filler, so it holds plenty of ink in that large barrel. The barrel has an ink window in it so that you can check on your ink level. It is a cigar-shaped pen, so the ends are rounded and not flat. And that’s about it. There aren’t really any options or other features to speak of. 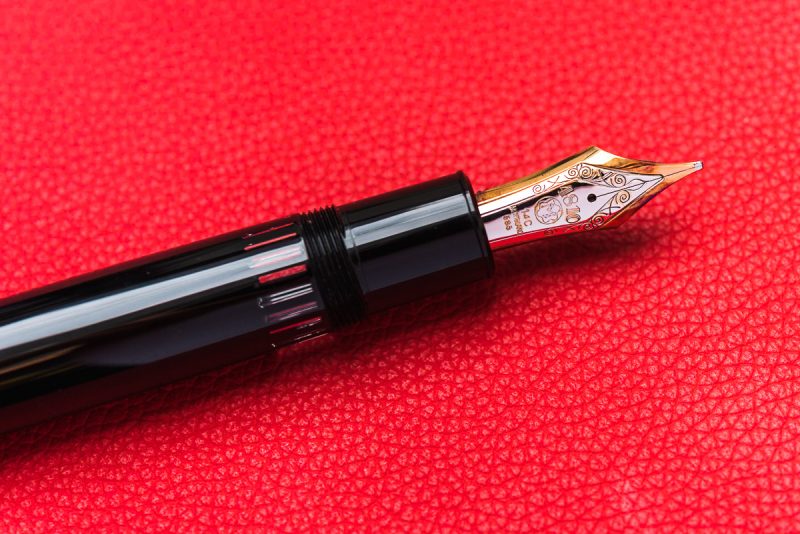 Here you can see the ink window in the barrel. 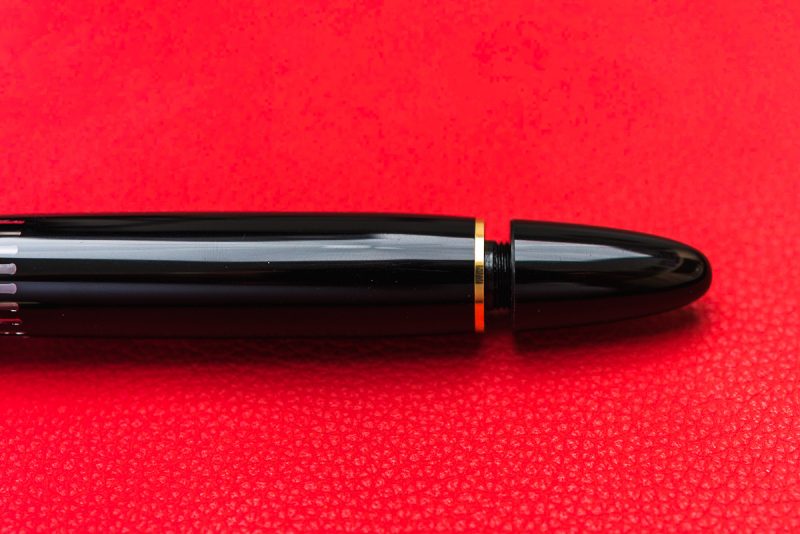 As I mentioned, this is a large pen. In length, it’s not much longer than an Lamy AL-Star, but the diameter is significantly bigger. Still, I have pens from custom pen makers that are both longer and bigger around. While it may have been one of the biggest pens on the market in the past, it no longer holds that title. With that being said, it is a comfortable pen to use. I don’t post my pens, which helps with the weight of the pen, but even when posted it feels very balanced. I don’t have an issue with the diameter either, as the actual grip is about the same size as many pens on the market today. 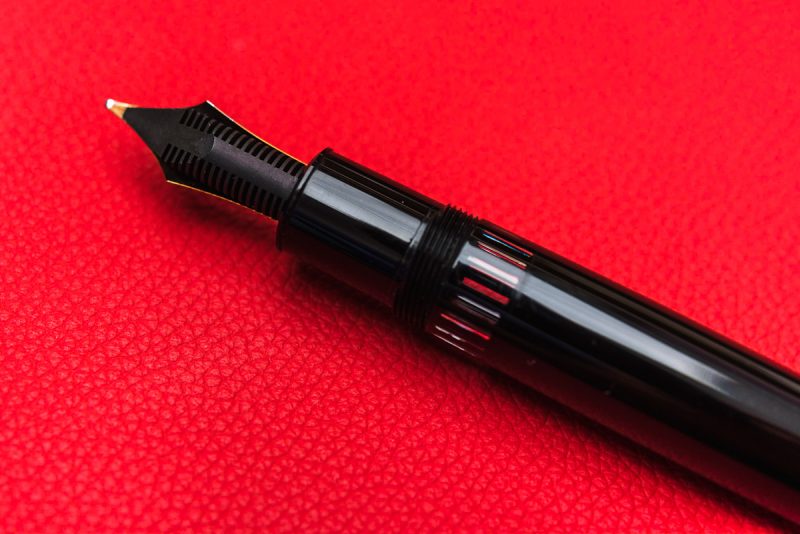 I find the grip to be a good size for my hand.

My particular pen is probably from the 1970s. Still, from the time I took it out of the box and started using it the piston mechanism has moved smoothly. I suspect a new pen would work great and provide many years of trouble-free use. From what my research turned up, Montblanc quality control and customer service is up there with the best pen manufacturers, so hopefully if you decide to purchase one you won’t have any issues, and if you do they will be resolved quickly.

How does it write? I have to say that the nib is fantastic. While it’s not marked with a size, this particular nib writes like a broad and even has a tiny bit of an oblique-like angle to it. It is very wet and, I assume due to the soft gold nib (mine is 14k, not 18k like the newer models), has a slight amount of flex to it. It is truly a joy to write with. I don’t have a lot of experience with Montblanc nibs, but if they’re all like this one, I can see why they’re so popular. 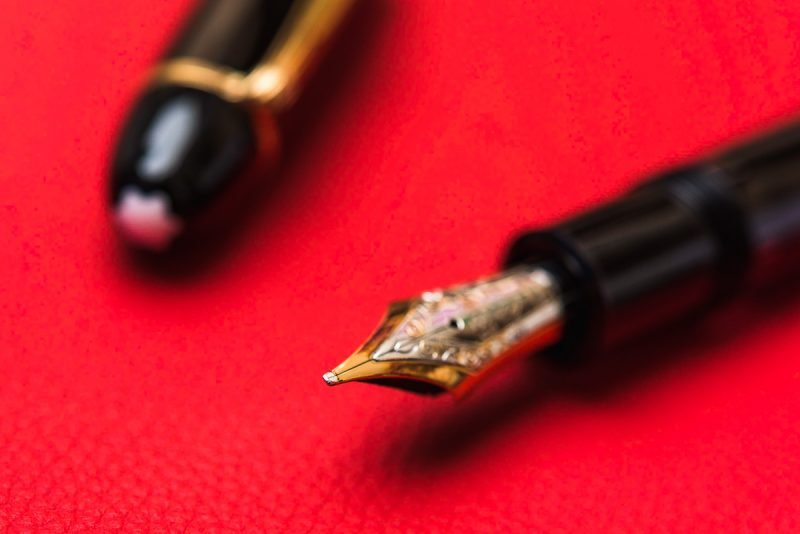 This is is wonderful to write with.

Is It Worth It?

Any time a pen like this is being discussed, there’s one big question that’s on everyone’s mind… is it worth the price? A Montblanc 149 is not a limited edition pen like many of Montblanc’s other offerings. You can go buy one any time you want, so availability doesn’t come into play with the price of this pen. It is not a unique pen like many of the urushi or maki-e pens that fetch high retail prices. It is not even a standout pen, as there are many pens on the market that are bigger and flashier. So why the high price? Is it simply the name?

I don’t think that anyone can deny that the Montblanc 149 is a quality pen. It is well made, a pleasure to write with and, in my opinion, can hold its own against pretty much any pen out there. Still, is it worth the price? In my opinion, no. At least not in a quantifiable way. But we’re human and it doesn’t always come down to the best value, does it? For many people, a Montblanc may be a reward to themselves, a symbol that they’ve finally made it. For others, having that white star poking out of their pocket or planner may simply be a status symbol. Whatever the reason, Montblanc pens have a mystique that can’t be ignored. When we see one, it’s not the same as seeing another fountain pen.

While the Montblanc 149 may be overpriced for what you get, that doesn’t make it a bad pen. In fact, if you’ve always wanted one, don’t let anyone convince you not to get one. If you have the means and the desire, I am pretty sure you’ll be overjoyed if you purchase one. They are timeless, quality pens that are a pleasure to use. If you want an icon in your pocket and a great writing experience to go with it, chances are you’ll be happy with a Montblanc 149. 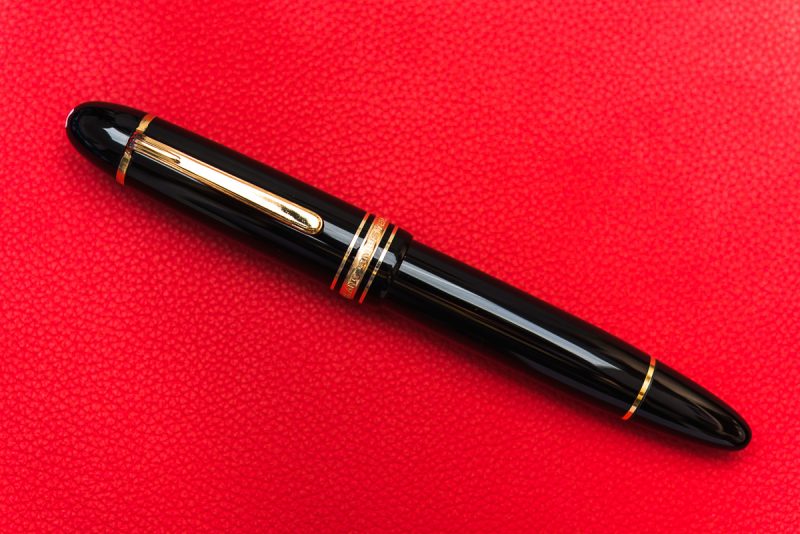