If you’ve been a regular follower of this blog for a long time, you may have noticed that I haven’t posted much in the past 6 months. Part of the reason for this is because of my career as a wedding photographer. This year was somewhat unprecedented in the wedding industry and it’s an understatement to say that I was swamped until mid November. Now that I’ve finally had a chance to catch my breath, I expect to be back to posting on a more regular basis.

While I was really busy this summer and pretty much absent from social media and this blog, that doesn’t mean I wasn’t using my fountain pens the entire time. In fact, I was using them on a regular basis, both for writing and for doodling! I even managed to make it to a few pen meetups, including the Colorado Pen Show. That’s what I want to talk about today… using your pens even if you’re not letting the world know about it.

Most of us have specific reasons for preferring fountain pens over other types of pens. Whatever your reason, there is always an opportunity to use a pen, even during the busiest of times. It may be to write to-do lists that will help keep you on task, to take notes on important calls, or journaling to organize your thoughts. If you’re like me, taking some time to doodle or draw can help relieve stress when you’re busy. Regardless of how you use your pens, putting pen to paper is valuable way to spend time for people like us. 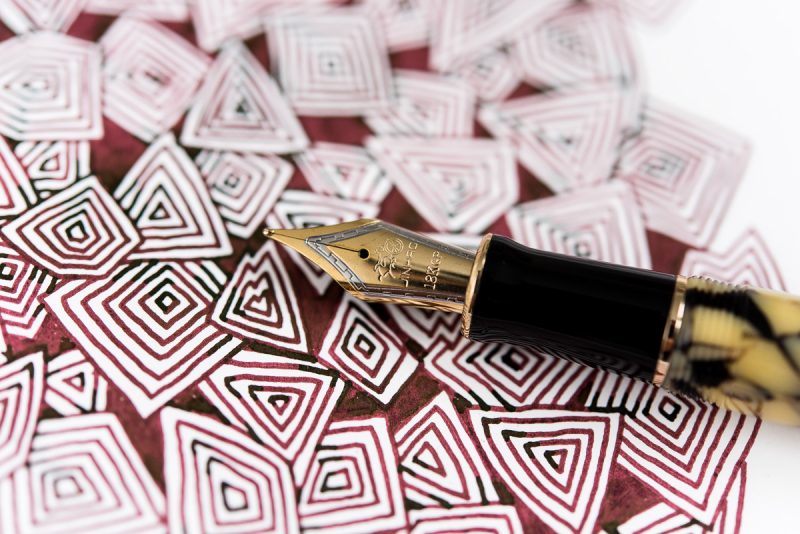 It takes time to do a large doodle, but it doesn’t all have to be done at once.

It can be overwhelming to think about sitting down with your pens when the rest of your life is busy. Don’t give yourself excuses to not write! For some people, a sticking point may be filling a pen to write with. First you have to choose a pen, then an ink that goes with that pen. Other people may get ahead of themselves and get overwhelmed at the thought of having another pen to clean. Don’t do that to yourself! You surely have a favorite pen/ink combination, so when in doubt, default to that. Or maybe you can try a new random combination! And as for pens to clean, what’s one more? Dirty pens can wait. 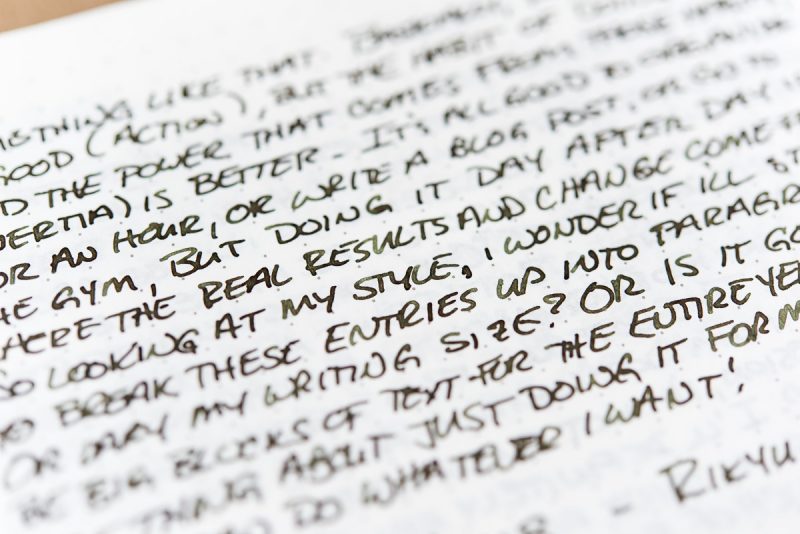 Writing in a journal can take time but is quite relaxing.

Are you wondering how to use your pens? I have a series of blog posts specifically answering that question. I have found that when I’m really busy, I don’t even want to try and come up with something to write or draw. At times like that, simply drawing lines or scribbling on paper is enough. It’s amazing how relaxing and satisfying laying down a swath of ink and watching it dry can be. 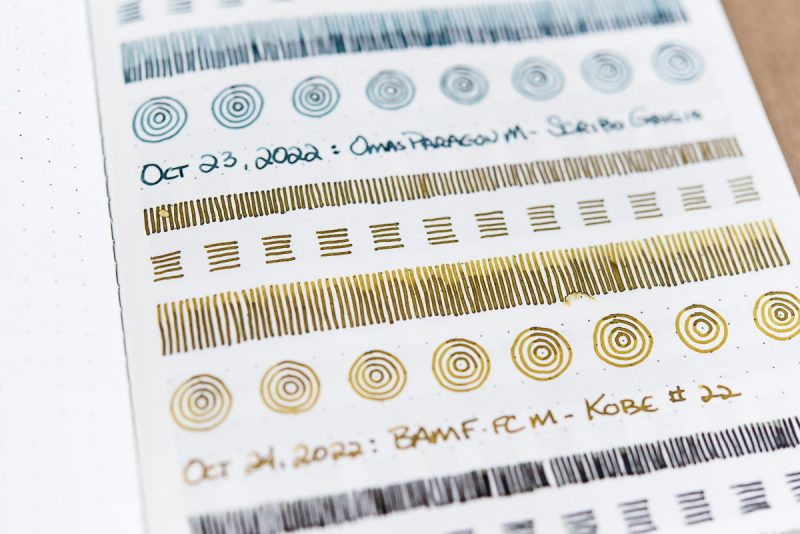 Sometimes drawing lines is all you have time for. 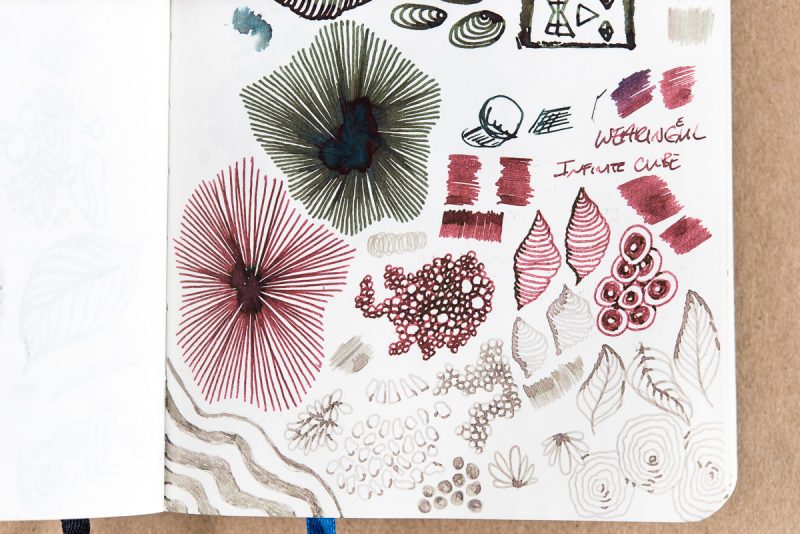 Doodles and scribbles with no purpose.

Keeping Up With The Hobby

For me, one of the first things that I stop doing when I’m busy is checking social media. I know that many people probably turn to social media as a way to escape, but I’m the opposite. Looking at pen-related posts on Instagram makes me realize how much I’m not writing or doodling and I get stressed out. It also overwhelms me when I see that new pens or inks are being released. Even if I don’t necessarily want them for myself, I still like to keep up on what’s happening in the industry, which I may not have time to do.

In the past 6 months, I hardly checked Instagram at all. While I know I missed out on a lot of things that the people I follow were doing, I just couldn’t muster the energy to dive in. I also missed out on a lot of industry information. For example, I missed the announcement that Cosmo Air Light was going to stop being produced. I also had never heard of Wearingeul inks until I was at the Colorado Pen Show and saw them at the Dromgoole’s table. I asked my friend Jesi (who was helping out at the table) what these new inks were and she let me know they were fairly new to the market. The things you miss when you’re not on social media!

Now that I’m back to checking social media somewhat regularly and writing blog posts, I can look back at these past months and see what I’ve missed. Fortunately, all of the new pens and inks are still out there and not going anywhere. I can browse through what people have posted on Instagram and catch up on what they’ve been up to. My biggest regret is that I didn’t have a bunch of blog posts already written so that I could continue to post throughout the year. That gives me a goal for the next wedding season. 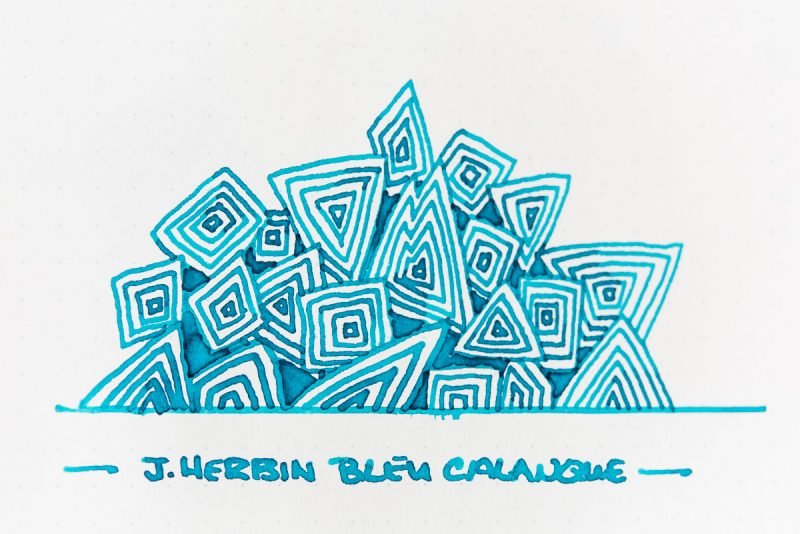 Sometimes a small doodle is enough.

I am happy that I kept up with writing and doodling, even at the busiest of times. It gave me something to look forward to and also helped me to de-stress. At times, it felt overwhelming and a little like a chore, but every time I found it to be worth it to sit down and put pen to paper. I hope that when you’re feeling overwhelmed or stressed out, you can make the time to use your pens. In my recent experience, it is definitely worth it.